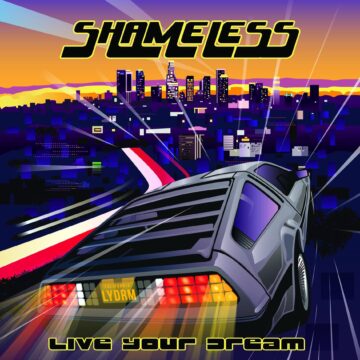 “Shameless bassist Alexx Michael is excited to announce the release of the tenth Shameless album, Live Your Dream, out now and available to order here: https://rockpapermerch.com/collections/shameless

This limited edition picture disc (300 copies worldwide) and cassette (200 copies worldwide) is released in conjunction with Michael‘s book Looking Inside : The Stainless Sensation, a 500 page deluxe bound definitive history of John DeLorean, the DMC 12 and the DeLorean Motor Company.

The picture disc features DeLorean themed graphics and features the new track “Live Your Dream” and a cover of “East Bound And Down” from the Smokey and the Bandit movie. The album’s 10 tracks are rounded out by Shameless classics taking you back in their time machine to the heyday of 80s glam rock.

Reformed in 1998 with partner guitarist BC and help of drummer Eric Singer (Kiss, Alice Cooper, Black Sabbath), Shameless is notable for having numerous American rockers appearing on their albums. They have established themselves as a band that doesn’t give a damn that the 80s are over and continue to turn out good-natured party rock and roll, regardless of shifting musical tends and styles.

For Live Your Dream, Michael again teamed up with guitarist partner BC, Steve Summers (Pretty Boy Floyd) and Stevie Rachelle (Tuff). Due to the pandemic making in-person studio recording impossible, Michael recorded Live Your Dream through collaborations from all over the planet including Munich, Los Angeles, Las Vegas, St. Louis, Copenhagen and Auckland New Zealand. As always the list of guest musicians is endless. Bruce Kulick (Kiss) and Brian Tichy (Whitesnake, Ozzy) are featured on the title track “Live Your Dream” along with guest vocalist Charlotte Tybalt of Blue Ruin. Kulick again contributes guitar tracks on “East Bound And Down” joined by Jaret Reddick of Bowling For Soup on vocals. The rest of the disc is highlighted by appearances by Keri Kelli (Slash, Alice Cooper, Night Ranger), Tracii Guns & Steve Riley (L.A. Guns), Frankie Muriel (King of The Hill), Michael Thomas (Beautiful Creatures, Adler’s Appetite) among others.”