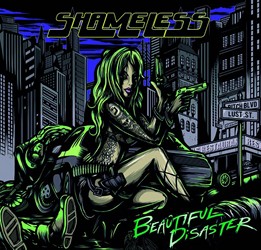 The new Shameless CD ‘Beautiful Disaster’ will be released on October 1st, featuring Steve Summers (Pretty Boy Floyd), Stevie Rachelle (Tuff) and Cherie Currie (formerly of The Runaways) on lead vocals. The CD is currently available for pre-order at shamelessonline.storenvy.com.

‘Beautiful Disaster’ contains 11 new songs with Cherie Currie making an appearance on three of them, including a cover of the T Rex/Marc Bolan classic “Life’s A Gas”. According to the band this marks the singer’s first appearance in the recording studio since 1998. In addition, the band recorded the timeless Alice Cooper classic “I’m Eighteen” with vocalist Stevie Rachelle.

Shameless have featured a who’s who list of guest stars over the years. Since their 1999 debut there have been appearances by Eric Singer of KISS, John Corabi (ex-Motley Crue, Union, The Scream), Phil Lewis of L.A. Guns, Teddy “Zig Zag” Andreas (ex-Guns N’ Roses, Alice Cooper), Robert Sweet of Stryper, Bruce Kulick (ex-KISS) and the late Jani Lane of Warrant.

A massive tour all over the UK this October and the rest of Europe in the spring will follow the album’s release.