Shameless to release new album ‘So Good, You Should…’ via Pride & Joy Music on May 20th 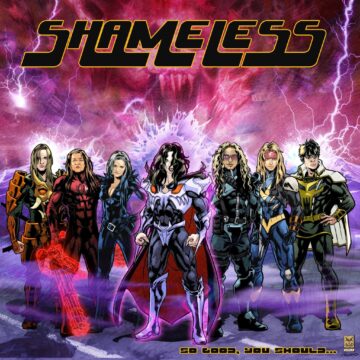 The following message was posted in part on Pride & Joy Music‘s Facebook page back on January 14, 2022 (with slight edits):

“Pride & Joy Music signs international Glam Hard Rock band Shameless; new album “So Good, You Should…” will be released on May 20th, 2022!

Shameless are a Hard Rock Glam band formed in the Spring of 1989 by bassist Alexx “Skunk” Michael in Munich, Germany. After a breakup, Michael decided to reform Shameless in 1998 with his friend and guitar player BC. Alexx enlisted help from drummer Eric Singer (KISS, Alice Cooper, Black Sabbath), whose introduction to Steve “Sex” Summers (Pretty Boy Floyd) and Stevie Rachelle (Tuff) started a long lasting musical relationship. Since then, the international outfit has released seven full-length albums and went on numerous tours.

For “So Good, You Should…”, Michael again teamed up with guitarist partner BC, Charlotte Tybalt, Dennis Post, Stevie Rachelle (Tuff), Frankie Muriel and Tod T Burr to release their first ever covers album which also includes two brand-new tracks. Due to the pandemic making in-person studio recording impossible, Shameless recorded the recorded the record at 12 different locations all over the world including Munich, Los Angeles, Las Vegas, St. Louis, Copenhagen and Auckland, New Zealand.

The band already released the single “Live Your Dream” with Charlotte last year in conjunction with Michael‘s book “Looking Inside: The Stainless Sensation”, a 500 page deluxe bound definitive history of John DeLorean, the DMC 12 and the DeLorean Motor Company.

Charlotte sings five of the new tracks plus adding backing vocals on almost all the other tracks. Like on all Shameless releases, Tuff singer Stevie Rachelle, sang on a couple of the songs. KISS legend Bruce Kulick is featured on a total of four songs including their version of the unreleased Gene Simmons song “Love Is Blind” and the cover of “East Bound And Down” where the band was joined by Jaret Reddick of Bowling For Soup on vocals. Tracii Guns appears as well on the new release.

Three more singles and videos will be released in advance to the album “So Good, You Should…” – starting on February 4th with the track “Shout Out Loud” on February 4th, 2022!”

Check out the first trailer here in advance:

Shameless‘ “Shout It Out” video: