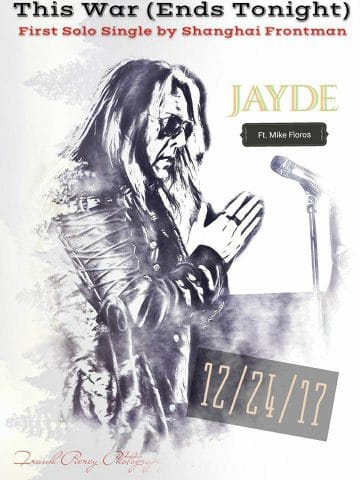 The single is available for purchase at CD Baby.

CD Baby indicates (with slight edit): “Jayde has been the powerhouse frontman/vocalist of the rock band Shanghai for 30 years. Jayde has covered songs by pop artists such as Adele and Justin Bieber in his own style of rock and has been recording new material with his band Shanghai. Jayde is now moving foreword with his own original music and looking to play some solo shows in the future. This is the first solo single that he has recorded. Featuring Mike Floros, of Idora fame, on all music and co-composed with Jayde on the track. “This War” is about the ending of a toxic relationship that is obviously over!”

Shanghai re-released their debut album Take Another Bite on vinyl and CD (with six additional bonus tracks for the latter) earlier this year.

Speaking exclusively to Sleaze Roxx at the time, Jayde stated about writing new material: “I think it had alot to do with me re releasing Take Another Bite on vinyl and CD! People have been eating it up. It’s so humbling and exciting seeing the reaction from the old diehards and the new fresh, even some younger fans, I’m receiving. Tony Scialla [Childs], Shanghai‘s original guitarist, and I are writing all new material for hopefully Shanghai 3! We have some bassists and drummers in mind but still have options open for maybe Ron Kramer returning at some point.”