Shanghai have just started an Indiegogo ampaign to raise funds for the re-release and 25th year anniversary of their debut album Take Another Bite. 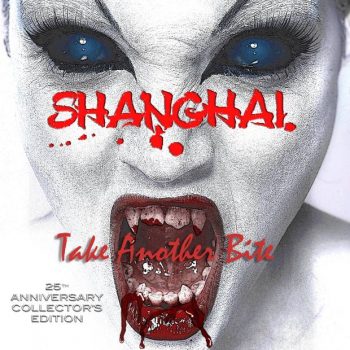 Shanghai had marginal success in Japan and Europe (charting #19 on the Billboard Rock Charts and selling over 25,000 copies of their debut CD) and still continue to sell CDs but unfortunately the band split and have all gone their separate ways. “Pease Me Tease Me” has appeared in movies such as The Amy Fisher Story starring Drew Barrymore and Sunset Heat starring Michael Pare, the late Dennis Hopper. Recently, Tony the guitarist and Jayde started recording again and are working on new songs hoping to perform live again with new twists on some Shanghai songs. The band has had a very rocky past 15 years, some have stopped playing all together and Jayde almost gave up singing but now they are ready to begin their journey with you again. Unfortunately, Shanghai lost Jodi the bassist in 2009 and this, is dedicated to him. With your help we can do this, we can’t do it alone and at the present time we have very little financial backing. Shanghai NEEDS YOUR HELP and that is where you come in. Please help to continue the legacy of one of the best 80s records out there. And keep Take Another Bite and Shanghai alive for another 25 Years.

Where Your Money Will Go:

The funds raised will go to Recording, Mastering, Printing, Layouts, Graphics, Marketing, Merchandise, and expenses due to distribution of songs like iTunes and physical Vinyl packaging. If we don’t reach the entire goal we will still use what we get towards the project. Don’t worry perks are set in stone.

The perks of contribution include things such as: Autographed CD/Vinyl, and Exclusive to this Fundraiser, Posters and Limited Edition T-Shirts. Even some surprise RARE OOP Shanghai Merch.

This is for you:

This is for YOU the fans that have truly supported us over the past 25+ years. We want to give back to the fans something they can cherish. This dream would never have come true without the help of our fans, friends and contributors.

Other Ways You Can Help:

Even if you can’t contribute financially you can still make an impact. Spread The word. Word of mouth can be one of the biggest components in getting our project accomplished. MAKE SOME NOISE. Visit our pages and share with your friends.”