American rockers Shark Island are reportedly recording a new album, which would be their first since 2006’s Gathering Of The Faithful.

“Shark Island was started in 1979 by singer Richard Black, whose name then was Rick Czerny, and lead guitarist Spencer Sercombe, under the name of ‘Sharks‘. Czerny and Sercombe met in high school and began writing original material and began playing music together. Sercombe, played and worked for B.C. Rich guitars. While working at B.C. Rich, Spencer 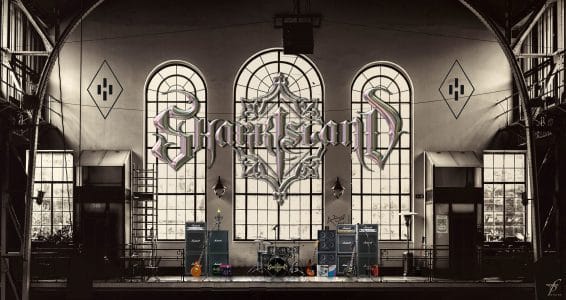 has a hand in the designing of one their most popular guitars, The Warlock. The band practiced out of a small home in a commercial area in Arcadia on Santa Clara Street. The walls of the studio were lined with empty Mickey’s Big Mouth bottles (the official Shark beer) and the inspiration behind the band’s original logo. The band was completed by drummer Dave Bishop and bassist Jim Volpicelli.

The original band of Czerny, Sercombe, Volpicelli and Bishop released an independent album called Altar Ego in 1982. This album was produced by Jerry Tolman, and featured organist Mike “The Fin” Finnegan. Both had done work with Stephen Stills. Executive producer was Jeff Willmitt. It was recorded at That Studio in North Hollywood.

As well as Altar Ego, Sharks released three singles. The first was a unique “triple fin” shaped 45, that when inserted into the jacket, cut through the ocean image on the cover. Side A was “Kid Sister” and side B was “Your Car or Mine”. Both were recorded at Mystic Studios in Hollywood. “Hey” was a live single recorded on May 10, 1981 at The Ice House in Pasadena, Sharks‘ home town. On the flip side was Mark Bolan‘s “Bang a Gong (Get It On)”. Executive producer for both 45s was Jeff Willmitt. The artwork of “Hey” featured a black 45 rpm sleeve with Live Sharks across the top in bold red letters with three USDA stamps saying, “Guaranteed Live” on the top of the stamp. “Packed in Its Own Juice” was on the bottom of the stamp. In the middle of the stamp it said, “U.S.D.A. Shark Meat choice” looking like an actual stamp from the U.S.D.A. The other single was “I’m Electric” which featured a drum machine rather than Bishop playing the real drums. On the backside of that single is “Santa Claus Is Coming to Town”. The lyrics are substituted and recorded to the tune of the Judas Priest song, “Heading Out to the Highway”. No artwork was created for this second single. This was considered a souvenir and was given out to the fans when Sharks headlined. Oftentimes, Sharks made themselves available after their performances to the many fans wanted and somewhat demanded autographs to these same “souvenirs”.

During these years, the Sharks became one of the most popular bands to emerge from the L.A. rock scene. American Heroes/Mondo Cane was an act that either opened for Sharks or had Sharks opening for them during the numerous performances. There were multiple occasions when both bands played in the same venues such as The Whiskey, The Icehouse, The Roxy or The Troubadour. It was at that time that Lanny Cordola, American Heroes/Mondo Cane‘s guitarist and songwriter, began noticing the unique and riveting stage persona of Sharks vocalist, Richard Czerny. Lanny seriously entertained the idea of Czerny being the frontman for American Heroes/Mondo Cane but both bands continued to perform separately never discussing the idea. Richard Black‘s (Czerny later changed his name to Black) signature stage moves and dancing were incredibly and majorly influential to Axl Rose. Black‘s unique and one-of-a-kind stage moves gave Axl the stage presence and persona to front Guns N’ Roses. If and when Axl Rose is or has been asked about this clear and obvious “influence”, Axl either avoids answering those questions altogether or immediately changes the subject further cementing this well known and documented “rumor”.

Dave Bishop was the drummer of Sharks while they were enjoying the height of their popularity in Hollywood. Bishop used various shapes of cowbell-like instruments in his drumming giving him his unique sound and along with his unusual style of playing. His drum kit had a shark’s jaws permanently fastened to the outer drum head of his bass drum facing the crowd. 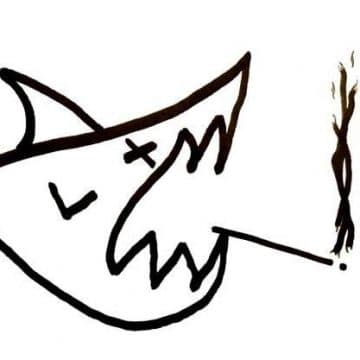 Jim Volcipelli was handling the duties of the bass guitar for Sharks. One of Volcipelli‘s bass guitars was custom-designed and had an air-brushed shark’s head and teeth painted at the end near the volume/tone knobs. Much like Michael Anthony of Van Halen, Volcipelli‘s vocals were strong and melodic bringing a very different sound to Hollywood’s rock scene. Many bands, at that time, only had the vocals of the lead singer with no background vocals. Clearly, this set Sharks apart from almost all of the current-playing rock bands at that time.

In 1985, Sharks changed their name to Shark Island. In the tradition of Van Halen, Mötley Crüe and other Los Angeles bands, Shark Island became the house band at the world-famous Gazzari‘s on the Sunset Strip. Owner Bill Gazzari even helped produce a cover of the Frank Sinatra song “New York, New York” which appeared on the band’s independently released album, S’cool Buss, in 1986. The line-up now included Richard Black on lead vocals, Spencer “Burner” Sercombe on guitar/vocals, Walt Woodward III (ex-Rachel, Americade) on drums/vocals, Tom Rucci on bass/vocals/keyboards and Michael Guy on guitar/bass. Rick Derringer produced most of the album and there were 1,200 copies made (200 in a red cover and 1,000 in a turquoise color). “Palace of Pleasure” was the unofficial single of this album. The former Sharks‘ rhythm section, Jim Volpicelli (bass) and Dave Bishop (drums) are credited with co-writing 4 of its 9 songs.

Sharks Island were able to secure a record development deal. They were signed by A&M Records to a development deal for one year with no promise of being permanently signed to an official record contract. During this time, the line-up continued to shift with drummer Walt Woodward III leaving to join The Scream and on-and-off guitarist K.K. Martin parting ways due to “artistic differences”. Rob Pace, from Chicago, filled in on drums during this time. Sercombe also did studio work with Sparks, playing guitar on the band’s 1988 Interior Design album.

Chris Heilman and drummer Greg Ellis joined in 1989 to record and release the band’s only official album, at that time, entitled, Law of the Order. The official single of that “debut” album, “Paris Calling” had an elaborate music video. Sharks/Shark Island had been known in Los Angeles nightclubs for having a raw, rough and hard-edged sound while being melodic and having memorable and catchy songs as well. Much like Van Halen‘s first album, it was believed that Shark Island‘s first album would be like experiencing them live to what they would be like seeing them in concert. Randy Nicklaus was the producer for Shark Island on that album on Epic Records. It’s generally speculated that Randy was not familiar enough with Sharks/Shark Island‘s high-energy and bombastic live performances and therefore not being able to fully capture Shark Island as they truly performed live.

With the disappointing CD sales of the album and no promotion from Epic Records, the band vanished from the scene with most of its members joining other projects. Law of the Order was re-issued in 2004 by French independent label, Bad Reputation, as a double CD. That included bonus tracks culled from the July 14, 1989 Bastille Day – Alive At The Whiskey EP, “Father Time” and “Dangerous” from the 1989 Bill & Ted’s Excellent Adventure OST, “My City” from the 1991 Point Break OST, and LOTO era live cuts, “Spellbound’ and “Sanctuary”.

In 2005, Shark Island reunited to re-record various previously-written and demoed songs for the album Gathering Of The Faithful, produced by guitarist Spencer Sercombe with additional production from German Villacorta and vocalist Richard Black. The line-up featured Black on vocals, Sercombe on guitars, piano, synthesizer and vocals, Christian Heilman on bass and new drummer, Glen Sobel, now with Alice Cooper. The album was released in Europe on Frontiers Records in 2006 and via Manifest Music in the U.S. in 2007.”

You can read more about Shark Island at Wikipedia.