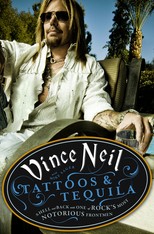 Neil originally took aim at Ozzy’s manager/wife in his new autobiography “Tattoos & Tequila: To Hell and Back with One of Rock’s Most Notorious Frontmen.” I the book, the rocker revealed he still resents the way he and his bandmates were treated when they supported Ozzy on tour in the mid-1990s. Neil wrote, “It just really sickens me today to watch everybody fawning all over Sharon Osbourne. She’s a talent judge on TV and she has her own show and this and that. This is the most evil, s**tiest woman I’ve ever met in my life. She would f**king have you killed if it was to her advantage…If people really knew.”

In an exclusive statement sent to PerezHilton.com, Sharon Osbourne hit back HARD, pointing out Vince is no one to pass judgement onto her or anyone else for that matter. In response, Sharon said:

“I was saddened to hear about the quote from Vince Neil’s forthcoming book in which he calls me “the most evil and shittiest woman I’ve ever met in my life” for trying to stop my husband from hanging around with him when Motley Crue opened for Ozzy on his ’84 U.S. arena tour. Guilty!

Vince, of course I tried to keep my husband away from you at all costs as I truly felt that you were a danger to Ozzy, yourself and everyone around you. I didn’t want him to end up like Razzle from Hanoi Rocks who died in a car accident because you were driving drunk or like the two innocent people who ended up with severe brain damage and whose lives were ruined as a result of your actions.

Today I see you as a pathetic 50 year old party boy who continues to put innocent people’s lives at risk by getting behind the wheel of your car and driving drunk and being arrested for assaulting women. Enough said.”

Vince Neil’s autobiography ‘Tattoos & Tequila’ will be released on September 23rd through Grand Central Publishing. Excerpts from the novel can now be viewed at this location.

Courtesy of www.sleazeroxx.com and perezhilton.com