She Demons change name to Hellfire Heart due to legal troubles

In a surprise announcement, the all female group She Demons led by Diemonds‘ frontwoman Priya Panda announced that it was changing name immediately from She Demons to Hellfire Heart due to unspecified legal issues. 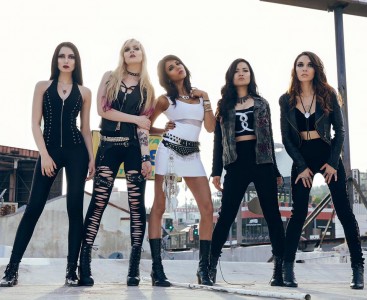 “To our lovely fans & followers, we know many of you have been wondering what has been going on & the changes you may have noticed. Unfortunately, beyond our control, we had to legally change our name. We’re very sad to part ways with that name, however, we are still the same band & will continue to make music, play shows and deliver as much as we can for you all! We aren’t going anywhere! Hope to see you on the road soon! xoxo”

Sadly, the all female group’s humorous video for its song “Fresh Blood” under the name She Demons seems to have been pulled from YouTube.

Sleaze Roxx interviewed Panda back in August 2015 close to the release of Diemonds‘ latest album Never Wanna Die and asked her about how she got involved with the She Demons and how this would impact Diemonds in the future. Panda replied, “I was kind of recommended for the gig and asked personally by Jerry Only to come out and tryout for the band. He kind of heard of Diemonds through the block and I don’t think that the opportunity would have come my way had I not done music actively for so many years. I just thought that it was an opportunity that I could not refuse just for the experience out of it and just for the chance of doing more music, writing more music, playing more music, touring — that’s what I live for. To be fair, every band has downtime and during that downtime, instead of doing what I do at home, I feel like I could be doing more music. I think that She Demons is the perfect project for that and I love those guys. They are amazing! And Diemonds is totally happy for me. We have balanced everything. Everything has worked out so far so we are totally stoked. Everyone has been really supportive. I am on top of the world right now. I am not going to lie to you (laughs)!”