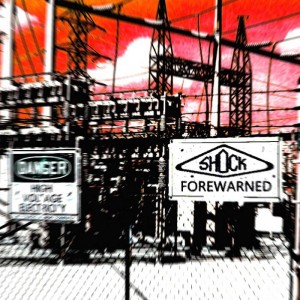 We were huge fans of Motörhead and they were coming to the Chaudière over in Hull [Quebec, Canada], which was a legendary old venue there. Motörhead were going to play upstairs in the Rose Room, which was like a big ballroom with a balcony. You could probably easily get 500 people in there. It was a pretty good sized room. The “Chaud” had been there since World War II.  Artists like Glen Miller and stuff had played there back in the day. It was a legendary venue in the ’60s, ’70s and ’80s. 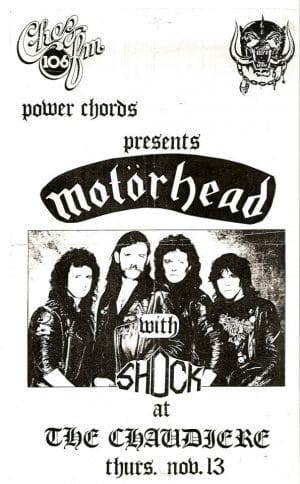 We ended up playing there several times over the years but this was our first opportunity to play there. We were always looking around and finding out who was coming to town. We would then call the club asking, “Do you need an opening act?” We were always right on top of that stuff. We heard Motörhead were coming to town as part of their Orgasmatron tour. I can’t remember how we did it but we found out Motörhead were playing and we got the opening act slot. We made a poster with Motörhead shots and got that around. It was all pretty exciting for us. It was winter and it was a freaking cold day. We went over to the club and this time, they weren’t even there yet. When we got there, we were told that they were delayed and so it came out that they were delayed crossing the border — I believe it was down in Detroit. So, we’re waiting, waiting, waiting, and finally, they got there with their stuff.

I was talking to Lemmy a little bit. He was just kind of standing there with his arms folded looking around at the place. As I was talking to him, I was thinking that this is so cool. This is why I wanted to be in a band. I was getting to stand in nice clubs and talk to musicians I looked up to and then actually play with them later. It took a while for Motörhead to set up and soundcheck. By that time, people were actually coming into the club. There were people waiting outside and by the time they finished, our stuff was still sitting on the floor! I was thinking right away, “This is kind of crappy having to set up in front of everybody and soundcheck and everything. That’s not the way you do it.”

So we were in our dressing room and the promoter actually came back and said to us, “Listen. Here’s the deal. It’s late now. There’s no point in you guys setting up now. Motörhead are going to play but how about you guys play after them?” The promoter continued saying, “Look, whatever you guys want. You’re going to get paid anyway.” I forget how much we were going to get. The promoter was really really good about it and said “I understand it’s not ideal but if you want to play, you’re going to play after them. You can’t play before.” We had a quick chat about it and replied, “You know what? I think we’ll just watch the show tonight.” We were thinking, “We’re not going to play after Motörhead. No one’s going to stick around.” 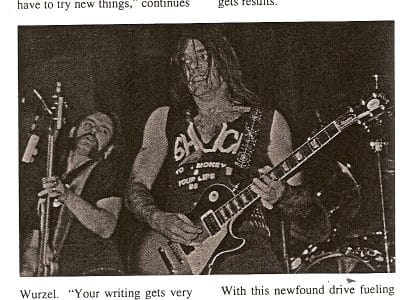 Let’s face it. We were of the frame of mind that if you’re going to pay us, and we don’t even have to play, that’s even better! So that’s what happened. I remember we actually exchanged shirts with the band. They actually gave us each one of their tour shirts and we gave them some Shock shirts and again, the funny thing about that was a couple of years later — well, it would have been quite a few years later — I was working for a radio station at the time and I used to get like trade magazines and stuff. I looked through one of them which had an article on Motörhead and there’s a live photo of them with Würzel [now deceased guitarist Michael Burston] wearing a Shock shirt on stage. It’s one of these things where you are thinking, “What the heck?” And then I remembered, “Holy cow! Back in ’86, we did exchange shirts!” You never know what they’re going to do with these things. You think they’re probably going to throw them out or blow their noses with them but that was not the case.

For years afterwards, we proceeded with a little bit of a white lie since part of Shock‘s bio stated that we opened for Motörhead. We practically did. We were the announced opening act but we never set foot on the stage because of those circumstances. These things happen. Other than the fact that we didn’t get to do a 25 minute opening set, we still got the whole meal deal of hanging out with them and seeing the show for free!

There was a funny end to the Motörhead gig evening for me. I had just started dating my girlfriend — now, my wife. We’ve been together for more than 30 years now. She was at the show and she actually lived right down the road from the Chaudière on the Quebec side. At the time, being naïve and stuff, she said, “Why don’t you stay over at my house?” even though her parents were there. I thought, “Geez. How is that going to work?” All quite innocently, she said, “I just live down the road. It shouldn’t be a problem.” I didn’t drive back then. I didn’t get my license until a bit later after that. So, I was like, “Okay. That sounds great.” I had the band’s money that we made that night. I forget who dropped me off at her parents’ house. It turned  out to be the classic scene where I went inside the house and the first person there was her dad [laughs]. Long story short, in a few quick seconds, I realized how awkward it was going to be to be staying over there that night. Of course, I don’t blame him. Here was this long haired guy in a leather jacket standing there with his daughter. That was the first time that I met my eventual father-in-law! I lived in Orleans [in the adjacent province of Ontario] which was quite a way from there. I was sitting there outside the home of my girlfriend’s parents. Bottom line is, the band’s money went to the taxi fare for me to get me home. The ironic thing is that I think that may have been the only opening gig we did where we actually did get paid and we didn’t even play!