Chicago, Illinois, USA heavy metal rockers Shokker have announced via a Facebook post by the band’s drummer Dan Dash that they are working a second guitarist into the line-up to complement current guitarist Casey Tremont. Shokker had announced yesterday that they would be undergoing a couple of major changes. Presumably the departure of frontwoman 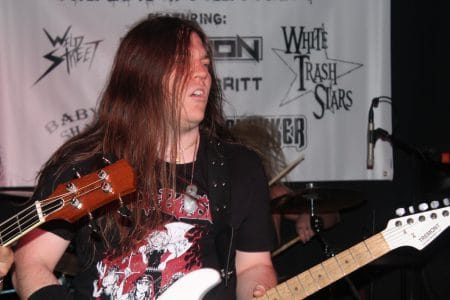 Rachl “Raxx” Quinn (announced on July 9, 2018) is one major change and the addition of a second guitarist would constitute another one.

“We had an amazing Shokker rehearsal tonight, working in another guitar player to shred alongside Casey. Sounds fucking HUGE

Sleaze Roxx stated the following in its review of Shokker‘s full-length album III and specifically the guitar playing on the record: “As I started listening to Shokker‘s debut full-length album III, all I could think was potential, potential, potential. It’s also what I was thinking when I first heard Shokker‘s self-titled EP about one and a half years ago except that at that time, I did not think that Shokker had truly tapped into and harnessed their potential. There were some kinks to fix including reigning in guitar virtuoso Casey Tremont, who perhaps if left to his own devices would have delivered an over the top guitar shred fest like superbly gifted guitar maestro Vinnie Vincent did on Vinnie Vincent Invasion‘s self-titled debut album. The good news is that this time, Shokker have lived up to and harnessed their potential as Tremont (or perhaps the rest of the band) has pulled the brakes on his guitar shredding to give us tasty snippets at the appropriate times on III rather than killer shredding firing occasionally at the wrong times like on the band’s debut self-titled EP.”