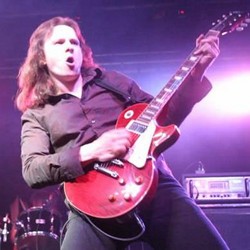 It’s been 6 months now since Shy’s self-titled album was released to great acclaim, grabbing the number one spot in reader polls across the world. Heralded as the best work the band have ever produced, it made the passing of guitarist and song writing genius Steve Harris all the more poignant.

Since the album’s release, the remaining members of Shy have been planning a show to mark the anniversary of the release of Steve’s final masterpiece. Today would have been Steve’s 47th birthday and to mark this the band are finally ready to officially announce the details. On October 28th, 2012 there will be a performance of the entire album performed live by Steve’s bandmates and, through the power of technology, featuring recordings of Steve Harris on guitar. The event will be raising money for Brain Tumour UK at the request of Steve’s wife, Deb Harris. This performance will take place at the Asylum Venue in Birmingham.

In addition to the performance of the album, the show will feature guest appearances from a number of well known celebrities, and a number of invaluable items will be auctioned on the day, also in aid of Brain Tumour UK.

This will be the only opportunity to see this masterpiece performed live and only a limited number of tickets are available. These will be on sale from Saturday 21st April from the Asylum website (www.theaslylumvenue.co.uk) and other selected outlets.