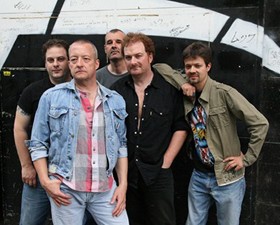 The Swiss rockers Sideburn have announced that rhythm guitarist Fred Gudit, lead guitarist Boris and bassist Michel Demierre left the band in September. Frontman Roland Pierrehumbert and drummer Lionel Blanc have decided to keep on rockin as Sideburn. The new line-up will be announced later this month at www.sideburn.ch.

“It’s always sad to have some partners and friends leaving and we know that it has been a tough call for them, we wish Fred, Michel and Boris all the best for their future” say Roland and Lionel. “With all the great music released those past years, the fantastic reactions received from our fans and the press worldwide, we really think that we still have much more to give. So stay tuned for some more rock’n’roll in 2012!”

Fred Gudit, Sideburn co-founder and composer, left the band in the beginning of August after a quarrel with Roland Pierrehumbert. Boris, Sideburn composer since 2005, decided to leave the band at the end of September as the relationships between band members were no longer satisfying to continue. Michel Demierre, a member of the band since 1999, left for the same reasons as Boris.

Sideburn were founded in 1997 from the ashes of Swiss Heavy Metal band Genocide (which were active between 1986-1997) by vocalist Roland Pierrehumbert and rhythm guitarist Fred Gudit. ‘Sell Your Soul (For Rock ‘n’ Roll)’ (1997), the self-proclaimed ‘rebaptism’ as Sideburn saw the band’s redirected approach, which resulted in this bare-knuckled album. Sideburn seemingly made no apologies for the full-scale change from Heavy Metal to riff orientated Hard Rock. The name Sideburn, in fact, is also admittedly rooted in rock tradition. Relentless gigging, including a pinnacle supporting slot for KISS at Hallenstadion in Zurich and a couple of line-up changes followed.

Following a brief hiatus where the realigned band tightened the screws a few turns, Sideburn resurfaced in 2001 with ‘Crocodile’ and later with ‘Gasoline’ in 2004. Swiss production guru Juerg Naegeli also re-enlisted for both discs. These releases continued to exhibit the band’s progressive dedication to the favored Aussie sound. Over this period, the band’s reputation as a tight, dedicated outfit both in the studio and live led to an impressive list of supporting tour engagements. Sideburn opened for legends Def Leppard, Motorhead, Dio, Ted Nugent, Thin Lizzy, Krokus and Doro… and even Meat Loaf.

2006 marked the 20th anniversary of the Sideburn/Genocide project. The band celebrated the milestone with the career spanning anthology titled ‘Archives’ before the most recent album ‘Cherry Red’ was released in 2008. The song “Six Feet Under” was featured in the last season of the famous show 24 with Kiefer Sutherland. In 2010, Sideburn worked on their new release with multi-platinum producer Beau Hill (over 50 millions album sold with Ratt, Gary Moore, Winger, Twisted Sister) as co-producer and mixer. Since September 2010, the fans can challenge themselves by playing the song “Cherry Red” on Xbox 360’s music game Rockband 3.

Sideburn’s latest album ‘Jail’ was released on February 25th by Metal Heaven in Europe (except Switzerland) and Japan.