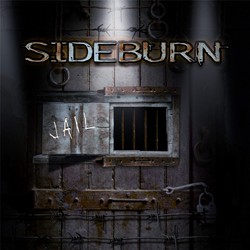 Swiss hard rockers Sideburn have revealed the album artwork and tracklist for their upcoming album ‘Jail’. The band’s seventh studio album is due out on February 25, 2011 through Metal Heaven (Europe and Japan) and Irascible Distribution (Switzerland). The new album is being co-produced, mixed and mastered by legendary producer Beau Hill.

The first full song preview will start on the December 21, 2010 on Jango’s internet radio exclusively at www.jango.com/music/SIDEBURN?l=0.

The band comments: “We have been in contact with Georg at AOR Heaven (Metal Heaven) since the release of ‘Cherry Red’, who has done a great work promoting it and our previous releases. And as we are pretty loyal, it’s a quite a logical move for us to collaborate with such a passionate company.”