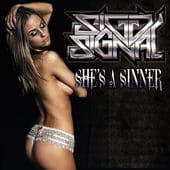 On October 1, 2015, New Zealand based Siggy Signal released a new single entitled “She’s A Sinner” which is available for preview and purchase on iTunes and Bandcamp. “She’s A Sinner” was mixed by Beau Hill (Twisted Sister, Ratt, Warrant, Alice Cooper) and recorded at Nightshift Studios in Christchurch, New Zealand.

Siggy Signal previously released a single entitled “Alive And Kickin'” which is also available on iTunes and for which a lyric video was released.

Siggy Signal is a New Zealand hard rock guitarist, multi-instrumentalist and singer. He is the former frontman for New Zealand hair metal band Mistress and the ex-guitarist for 80Proof.