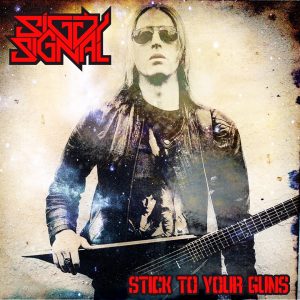 New Zealand based Siggy Signal has released the song “Stick To Your Guns” from his upcoming solo EP, which will be mixed and mastered by Chris “The Wizard” Collier (Lynch Mob, Jeff Labar, Last In Line).

Sleaze Roxx recently reviewed the debut EP for Signal‘s first band 80Proof which he was a part of when he first arrived to Christchurch, New Zealand more than ten years ago. Sleaze Roxx stated the following in its review about 80Proof‘s debut EP: “The music on 80Proof is straightforward and uncomplicated but immediately draws me in from the first few notes of opening track “Unzipped And Lethal.” The drums are front and centre on this opening track and the guitar riffs and solos are solid, simple and enjoyable. Singer Mark E. Harlot will never win a singer of the year award but his sleazy delivery works well on all the EP’s three tracks.” Sleaze Roxx concluded its review by stating: “It’s a shame that 80Proof are no longer because the sleaze group’s three song self-titled EP is a strong debut album and showed a lot of what turns out to be untapped potential. The good news is that 80Proof‘s debut EP is available for free streaming on Signal‘s Bandcamp page.”