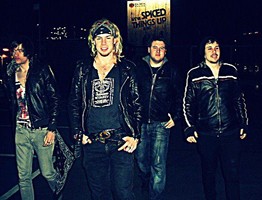 Silent Jack, the hard rock band from Birmingham, look to spread their hard rock sound further throughout the UK during their ‘Some Hot Luvin’ Going Down’ tour at the end of March 2013. The six date tour will see them playing alongside many other acts in order to thrill audiences with their own brand of hard rock music.

Last year’s ‘Fake It Til You Make It’ tour was met with such a positive response that the boys from Silent Jack wanted more. The band’s debut single, “Hot Luvin'” was launched in September 2012 to positive reviews, with a launch party that featured local acts such as Loveless Luck and Sour Mash, but no tour was forthcoming at the time.

This needed to be remedied, and thus a tour is on the way. In March 2013, Silent Jack will take their brand of bluesy hard rock with a sleaze influence on the road. But not only that, the band are giving away a free track. “Going Down” has officially been released and is available as a free download at www.silent-jack.com.