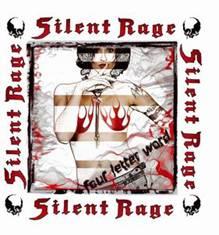 Silent Rage is known for their multi-captivating vocals, the unmistakeable blend of Melodic and Hard Rock and signature songwriting reminiscing of the glorydays of 80’s Arena Hard Rock. “I think our sound can be described as Classic Arena Style Hard Rock” says singer and guitarist Jesse Damon “that’s what we’re considered in Europe!”

“Four Letter Word” is another fine example in the tradition of the band’s classic production. “We had a great time staying within the natural progression of our 1989 release “Don’t Touch Me There” & mixing in the sounds of modern hard rock” continues Damon, “all of the tracks, whether lighthearted or serious in nature, have deep meaning to the band members. There’s no hidden agenda, just melodic-hard-rock with contemporary production, written from the heart & soul of four veteran rockers”.

Silent Rage’s new album was produced by former Guns’n’Roses guitarist Gilby Clarke who is also credited on the album for his contribution on guitar, keyboards and percussion. “Gilby is a long time friend of the band”, tells Jesse “We were first acquainted with him back in the 1980’s when he was playing with his band, “Candy”. Both bands were performing on the Sunset Strip in Hollywood. Then, Silent Rage’s first tour manager (Bill Greer) went on to work with Gilby in Guns’n’Roses and we got to see his rise to fame. Our association with him became very close when our bassist, EJ Curse began riding motorcycles with him on a regular basis. EJ went on to play bass for a few of Gilby’s concerts. SR heard the CD of “The Bronx” that Clarke produced & loved it. It was great to work with someone that we had such a long kinship with”.

Another very special guest is RATT’s Bobby Blotzer on drums and former KISS guitarist Bruce Kulick, who plays a guest solo on “Man or Machine”. “We met Bruce while working with Gene Simmons on the “Don’t Touch Me There” CD” explains Damon, “Bruce co-wrote one of the songs for that disc. Kulick has always been in our circle of friends & a supporter of Silent Rage. We always admired his guitar virtuosity plus, he’s a great guy. Knowing he lived nearby our recording studio, we had to ask him to do a jam on the CD. We thought it fitting to have him perform on “Man or Machine” since originally, that song was an idea that Gene Simmons & I started a few years back”.

Silent Rage is very proud of the new CD “Four Letter Word” and look forward to present it live in Europe during the summer. A string of concerts has been already set in Europe and more are going to be announced shortly.

Get ready for a raw, rock explosion for melodic hard rock fans, new and old, on July 4th!