Deep Purple‘s new guitarist Simon McBride was recently interviewed by Andrew Daly for Vinyl Writer Music. Back on July 23, 2022, McBride was announced as the official new guitarist in Deep Purple after having temporarily filled in as a touring member earlier in 2022 while guitarist Steve Morse was taking care of his wife who had been diagnosed with cancer. 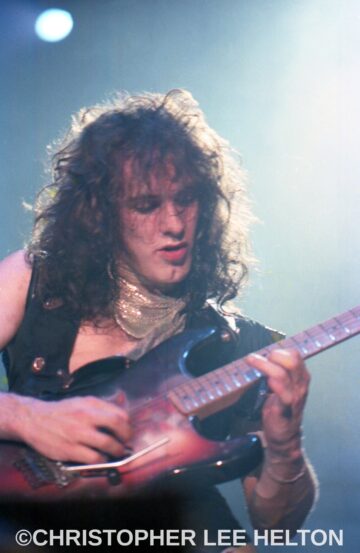 Daly asked McBride about the initial call when he was asked to replace Morse. McBride replied: “Well, there was talk of me stepping in for Steve temporarily towards the end of last year in 2021, but I never really thought much of it. I never thought much of it because it was always a case of, “It may happen, or it may not happen,” because it depended on Steve’s wife’s condition as to whether he would be able to tour. But it just got to the stage where Steve decided enough was enough, and he needed to look after his wife, which is an amazing thing he’s doing. So, I knew it was possible, but I didn’t know for sure; I only really found out recently that I was being confirmed as a permanent replacement.”

McBride had worked with some of the Deep Purple members in the past so Daly asked him if the chemistry was immediate with the guys to which he replied: “Yeah, it was immediate, to be honest. We had a few days of rehearsal in May, and that’s all we needed. And then we did a few shows in Israel, and places like that, which were my first shows, and all we had was those few days of rehearsal. I know Don [Airey] very well, and I’ve played with Ian [Gillan] and Roger [Glover] for a long time, so it clicked quickly. But yeah, it was a funny thing; we did the three or four days of rehearsals, but we really only needed one. After the first day, we all looked at each other and said, “Well, we think it sounds pretty good. We don’t really need two extra days.” We got to work straight away, and everybody was very happy. It helps that I’m a very easygoing person, and I get on well with everybody, I think. So, there was never an issue or a thought about if I would get on with them or not. And as I said, I’ve met them before, knew their personalities, and knew what to expect, so it’s been a great atmosphere.”

In terms of what makes him the perfect fit for Deep Purple, McBride indicated: “Ah, I don’t know, man. I mean, there are a million guitar players out there, and they’re all brilliant, right? I believe in this industry, there’s a lot of luck, and I think I am fortunate. I remember my friend Vivian Campbell once told me, “Simon, a lot of the work is done not on stage but at the bar afterward,” He was right because that is where you get friendly with people. Of course, you have to be talented to get recognized, but I think a lot of it is I get along well with people, and that’s the thing with being in a band; you have to get on well offstage, too. So, I guess the reason I’m the perfect fit is quite obvious because I played with them all before, and I got to know them. I’ve done it for the last few years, so it was kind of obvious, and they knew that we get on well. It’s hard to say, though; I turn up and play and hope things go as they’re meant to.”

You can read the rest of the interview with McBride at Vinyl Writer Music‘s website.