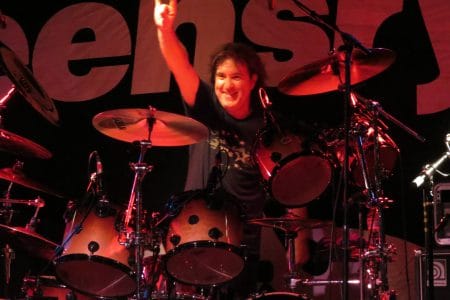 Wright was asked about the status of Dio Disciples‘ debut album to which he replied (with slight edits):

“The album is on hold cause we took a shift and we were all involved with the Hologram, which is called Dio Returns. So we were out on the road of May-June of last year and it went really well. When we first started, it was kind of slow and people were very wary of it and you can’t blame them cause it’s new technology. People were thinking we were doing Ronnie a bad move which is ridiculous. People have screens up that show images and it’s pretty much the same thing. So we took a shift and Dio Disciples is on hold at the moment. We have got about four-five demos down of different songs that me and guitarist Craig Goldy were working on and that’s about it. It’s kind of on hold at the moment as we are focusing on Dio Returns.”

In terms of working with Ronnie James Dio, Wright indicated: “Ronnie was just great to work for. He let me do my own things and experiment with things [like drumming]. I just loved the way he worked. It was all about the music to make it the best possible.”

You can read other excerpts from the interview with Simon Wright at The Metal Voice‘s website and/or listen to the interview below: