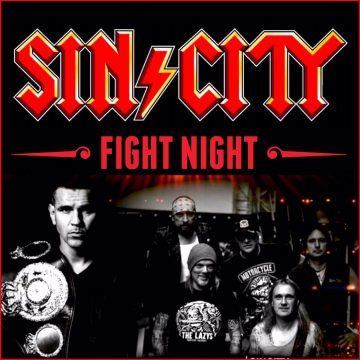 “As a follow-up to our 2018 song/clip “Rock n Roll HiJack”, we have a very special collaboration. This is “Fight Night” which supports our friend and brother, German middleweight box champ, Jürgen “Dobermann” Doberstein. Sin City is proud to support this great calmed down guy who is highly explosive when he gets in the ring! Our collaboration started when Jürgen Doberstein Management asked our guitar player Frank “Eule” Seiler to play some rockin’ riffs as — let’s say — entrance soundtrack for a fight that Jürgen had in 2017. After that, it was absolutely no question as the idea came up, to create a full band rock anthem for Jürgen. We think rock n’ roll and boxing fit perfectly! Enjoy our rocking tune!”