Sin City provided the following message in part on their Facebook page earlier today for the video release (with slight edits): 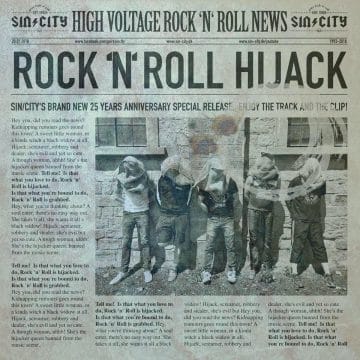 “It was February 19th 1993, where we played our first show and back than no one thought about, that our enthusiasm would hold one for that long.

It means a lot to us, that we still get booked with our hybrid, sweat soaked RnR show, full of AC/DC standards plus rarities mixed up with own material from our four CDs.

It was our plan from the beginning on, doing own songs too – side by side with all those influencing hymns from down under – the music we love to play!

So now after 25 years – and playing in many european countries too – we like to give something back, SIN⚡️CITY Style.

This is our new song “Rock n Roll HiJack”, recorded at Daniel Kellers Sureshot Studios and implemented cinematically by Dennis Keller and Julian Schneider, given as a free song to you, the rocking people.

Enjoy the clip, the song and feel free to download it, share it, wherever you want to.

Hi, SIN⚡️CITY is speakingnow, after 25 years and many, many shows of rocking and rolling we – as a band – like to adress a big, fat Rock n Roll THANK YOU to …