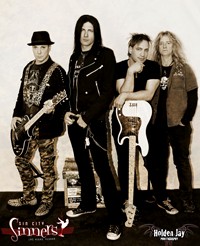 As a musician, Zach has recorded, performed and/or toured with Susanna Hoffs of The Bangles, Jerry Cantrell of Alice In Chains, Anthrax, Barenaked Ladies, Lemmy from Motorhead, Cheap Trick, Meatloaf and Jamie Walters. As a session vocalist for television and film, Zach has performed on many commercial jingles as well as sung the Greg Brady vocals for the films The Brady Bunch Movie and A Very Brady Sequel. He also sang the theme song for the ABC television series Grace Under Fire. As an actor, Zach starred in the FOX television series, The Heights, as well as performing on the show’s hit song, “How Do You Talk To An Angel?” which reached #1 on the Billboard charts in 1992. Other acting credits include Beverly Hills 90210, Party Of Five, E.R., and C.S.I. He is also the voice for the online video game sensations, “Bejeweled” and “Bejeweled Blitz”

The Sin City Sinners is more than just a band, it’s an experience… What began as a weekly ‘just for fun’ jam at a local dive bar, evolved into standing room only shows featuring appearances by some of rocks hottest musicians and celebrity’s. As the bands reputation grew so did the need for larger venues and the band has become one of Vegas’ top headliners.