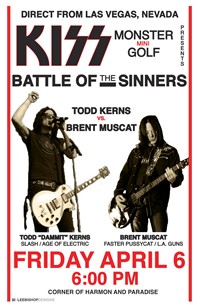 On April 6th, two members of Las Vegas’ favorite band Sin City Sinners will compete in a competition of epic proportions! Todd Kerns (Slash, Age of Electric) will take on Sin City Sinner bandmate Brent Muscat (Faster Pussycat, L.A. Guns) in what will undoubtedly be the undisputed Mini Golf event of the century.

The event is 18 holes of no holds barred indoor glow in the dark KISS themed Mini Golf action and takes place at 6pm inside KISS Monster Mini Golf in Las Vegas (4501 Paradise Rd).

Sin City Sinners and Monster Mini Golf are in negotiations to have the winner of this competition play former KISS guitarist Bruce Kulick at a future event.

In 2009, the Sin City Sinners decided to finally put some of their self-penned originals and favorites into their debut CD. The CD, ‘Exile On Fremont Street’, was released in early 2010 and was met with rave reviews. The hard work of the Sin City Sinners also garnished them the title of “Best In Vegas – Editor’s Pick” by the Las Vegas Review Journal.

With the success of ‘Exile On Fremont Street’, the Sin City Sinners decided to release a second acoustic album titled ‘Broken Record’.