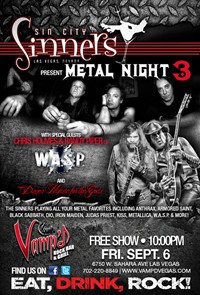 The event is called Metal Night 3, and although Sin City Sinners are not known as a heavy metal band, on this particular night they will be performing all your metal favorites including Anthrax, Armored Saint, Black Sabbath, Dio, Iron Maiden, Judas Priest, KISS, Metallica, W.A.S.P. and more.

The show takes place at Count’s Vamp’d in Las Vegas at 10pm on September 6th and is free. Those who live outside Las Vegas you can catch this monumental jam live in the privacy of their own home via Stage It for just $5 at www.stageit.com/sin_city_sinners/metal_night_3_w_chris_holmes_randy_piper_of_wasp/28060.

Sin City Sinners have released three original CDs, the critically acclaimed ‘Exile On Fremont Street’, the all acoustic ‘Broken Record’ and the future Holiday favorite ‘A Sinners Christmas’. The Sinners’ local charitable efforts have raised well over $100,000 for various causes in the community including The St. Baldrick’s Foundation to fight cancer and The Cystic Fibrosis Foundation. Original singer Todd Kerns is currently on tour with Slash.