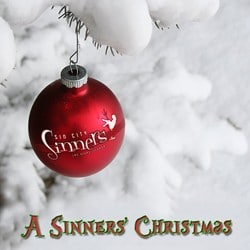 A portion of the sales from ‘A Sinners Christmas’ will be donated to the Toys for Tots Las Vegas chapter, who help to make sure less fortunate children have toys for Christmas — www.toysfortots.org.

The band will celebrate the release on November 25th with a Las Vegas party and toy drive at Club Madrid (inside Sunset Station Casino). Admission is FREE, but The Sinners encourage everyone who is able to bring a new unwrapped toy to be collected by the Marines for Toys For Tots.

‘A Sinners Christmas’ was recorded, mixed and mastered at Hit Track Studios in Las Vegas and produced by Brent Muscat and Tom Parham, and executive produced by Jason Green.

What began in 2007 as a weekly ‘just for fun’ jam at a local dive bar, evolved into standing room only shows featuring appearances by some of rocks hottest musicians and celebrity’s. As Sin City Sinners reputation grew so did the need for larger venues and the band has since become one of Vegas’ top headliners

In 2010 The Sinners released two CDs of original music, Exile On Fremont Street and Broken Record. In 2011 they were voted “Best In Vegas” in the prestigiousLas Vegas Review Journals Reader’s Poll, and their music video ‘Goin’ To Vegas’ received the 32nd Annual Telly Award.