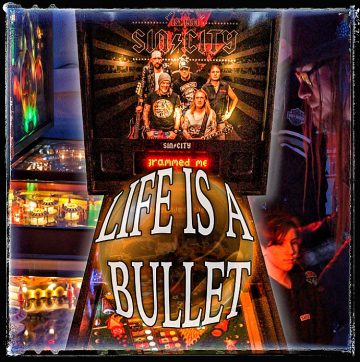 “Sin City like to thank every involved human being behind or in front of the cameras in this “four minute wonder”.

Special rockin’ thx to Leon Grünewald (as Tim Tilt) and Aki Rytkönen (as The Champ) for much fun and work during the video shot in late September 2019.

We also salute Dennis Keller and his entire crew at Promotion-Pictures for recording and cutting the clip.

From the early start creating/recording “Life’s A Bullet”, bringing  music and lyrics together, we figured out the idea to inject new blood into the old Pinball Wizard story. We just wanted to add the thing, that rock fans have to stand together at the end of the day, plus following your (in our case “Tim Tilts“) dreams is absolutely possible.

Sin City announces as well, that in December 2019, another track called “Z-Revenge” will be released, as a tribute to a friend, rock n roll influencer and great dude who sadly passed away.”