German rockers Sin City have released a lyric video for their song “Z-Revenge” to honour their friend Manfred Zwally who passed away earlier this year. 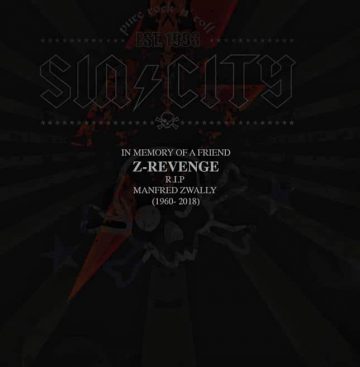 “We, Sin City, were pretty shocked and devastated as we received the sad news 2019, that Manfred Zwally, a close friend and rock ‘n roll mentor died tragically. We had lost closer contact during the last years, but had never forgotten what he did for us in the early pre Sin City days. He was an owner of a famous rock bar in our hometown of Zweibrücken, Germany, which gave us our first rehearsal space to form the band, which turned out to be Sin City.

Manfred was a real funny guy, a rock ‘n roll brother a huge T-Rex / Marc Bolan fan and friend in many ways.

Sure he made some mistakes, but we, Sin City, came up fast and worked out the idea during the last month, to honor him with a bluesy ballad and a quick lyric video, whilst parallel working on our last song / video “Life‘s A Bullet” which aired earlier this autumn.

R.I.P. Manfred Zwally “Get it on- bang a gong”, wherever you are!

Sin City is paying tribute to a friend, a lost brother, a mentor, an influencer in the early early days of the band. He was a hell of a guy – surely with mis…