Singer Chris Van Dahl advises that he is not taking part in Steve Riley’s L.A. Guns at M3 Rock Festival

The list of alumni who will be playing with drummer Steve Riley‘s version of L.A. Guns at the M3 Rock Festival in Columbia, Maryland, USA in early May 2019 is starting to narrow down.

Metal Sludge advised back on December 6, 2018 that it had confirmed that singer Jizzy Pearl (who appeared on L.A. Guns‘ 1999 album Shrinking Violet) would not be singing.

“Pierre Simard I’d love to see the actual statement where Mitch Lafon confirmed that lineup. I know for a fact I’m not doing it and the likelihood that Kelly is involved is slim to none.

Just going on the record here.”

In addition, it appears that guitarist Stacey Blades will not be taking part in Riley‘s version of L.A. Guns. Rock journalist Mitch Lafon of Rock Talk with Mitch Lafon had announced via Facebook on December 6, 2018:

“There will be a second touring L.A. Guns in 2019 which will include drummer Steve Riley and guitarist Stacey Blades. No word on who will be singing.”

However, Lafon advised today in the series of Facebook comments involving VanDahl:

“Chris VanDahl #FakeNews Chris – I absolutely never announced a lineup. Stacey Blades thought of doing it but has since passed. Kelly is apparently in, but Pierre’s assertions that I said anything further is FALSE. Hopefully, he’ll delete his post. It’s 100% wrong.”

With the rhythm section (Riley on drums and Nickels on bass) seemingly confirmed for Riley‘s version of L.A. Guns, the likely highest profile candidate for the alumni guitarist position would be Michael Grant who claimed to have been fired from the Phil Lewis / Tracii Guns‘ led version of L.A. Guns back in March 2018.

In terms of potential L.A. Guns alumni singers, the remaining higher profile alumni candidates would be Steel Panther‘s Michael Starr (which seems very unlikely considering how well Steel Panther have been doing in the last 10 years) and singer Paul Black (1985-87 and with Tracii Guns‘ version of L.A. Guns in 2006-08) who co-wrote many of the songs on L.A. Guns‘ self-titled debut album. 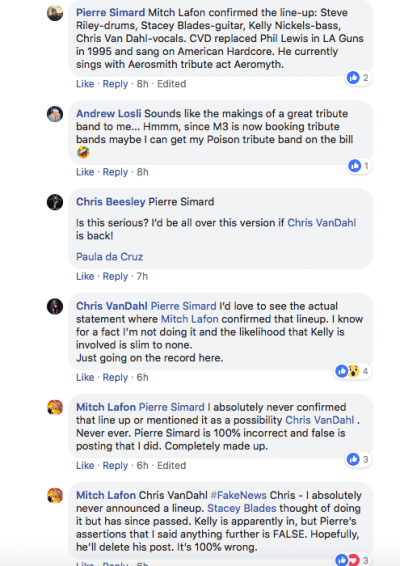 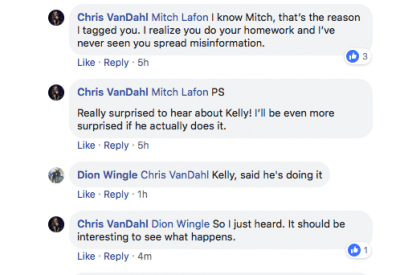