In terms of how he ended up joining forces with guitarist Malcolm Young in AC/DC, Evans recalled: “I joined a band called Velvet Underground. That was one of the top bands in Sydney at the time; everybody knew Velvet Underground. They were looking for a singer, and I happened to audition for them and get the gig. They talked about a former member who had only just left, a guitarist called Malcolm Young, who was the young brother of the famous George Young of The Easybeats. [The 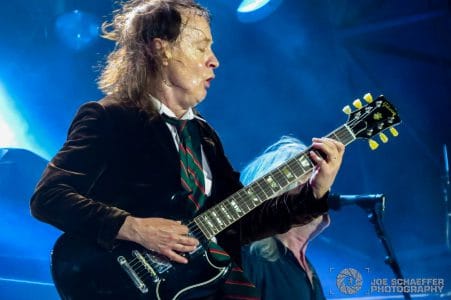 Easybeats] were a huge band around the world; I used to buy their records when I was a kid in school. I didn’t take too much notice of it because he wasn’t around, but they would talk about Malcolm at times. Then finally, we broke up, Velvet Underground, and I answered an ad in the local Sydney Morning Herald for a rock singer into The Rolling Stones, Chuck Berry, and Free.

When the fellow at the other end of the phone answered, it was Malcolm, and he asked me who I was; I said, “Dave Evans.” He said, “Oh, with Velvet Underground?” I said, “Yeah.” He said, “Oh, great. Come around and jam with us.” He had two other guys, and he said, “There’s three of us. We just want a singer to form a band.” So, I went around that afternoon and jammed with him, Colin Burgess on drums — he’d been with The Master’s Apprentices, which was a huge band – and a bass player called Larry Van Kriedt. So, the four of us jammed most of the stuff that I was doing with Velvet Underground, and Malcolm knew the stuff, too. And after we jammed, Malcolm just said to the other boys, “Well, I’m happy with Dave if you guys are.” They were, and he said, “Well, do you want to join?” I said, “Yeah. I’m happy with you guys.” So, we shook hands, and we had a band.

But a couple of weeks later, Malcolm asked if his younger brother Angus could audition for us. He had a band already called Kantukee, but they’d broken up. So, he asked if Angus could come along and audition, and we said, “Yeah, sure.” He auditioned for us, and he joined. So, there were the five original members of ACϟDC. We had a settled lineup for the band.”

With respect his early impressions of Angus Young, Evans indicated: “Look, Malcolm was the better player ‘cause he was the older brother. Malcolm was about 21; Angus was 19 at the time. He wasn’t 16; that was a fallacy put out so that people would think he was still in school, with the homemade schoolboy outfit. But Malcolm was a bit older, and he was a better player at the time. Malcolm was a better rhythm player; he was a strong rhythm player. When we first started, they both used to play lead. Angus wasn’t the lead guitarist; he was one of the guitarists. In fact, the first record that I recorded with them, “Can I Sit Next To You, Girl/Rockin’ in the Parlour,” you got Angus playing lead guitar on “Can I Sit Next To You, Girl.” But on the B-side of the single, you got Malcolm playing the lead on “Rockin’ in the Parlour.” We were on tour when Malcolm announced to us that he was going to stick with the rhythm because he was better at it than Angus. And of course, Malcolm was writing the songs anyway at the time. He said that Angus was going be the show pony, as it were, and do all the leads. That was Malcolm’s decision.”

You can read the rest of the interview with Dave Evans at Vinyl Writer Music‘s website.