Former original AC/DC lead vocalist Dave Evans was recently interviewed by Jimmy Kay for Canada’s The Metal Voice and was asked about the truth behind various myths surrounding AC/DC.

When asked about the myth that lead guitarist Angus Young was 16 years old and still in school when he joined AC/DC, Evans advised (as transcrib 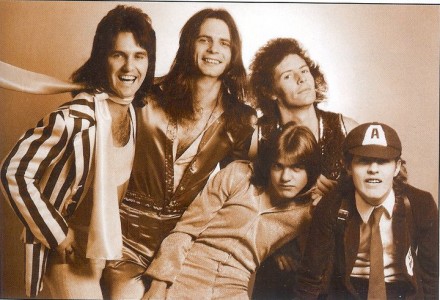 ed by The Metal Voice with slight edits): “Angus was about 19 years old. We put his age down to 16 years old because he was so little. George Young wanted us to look different from the other bands in Australia. So they told us Angus was going to wear a school boy outfit, put his age down to 16 to relate to the kids, as we had lots of school gigs at the time. The school boy uniform was made for him by his sister. Angus was not going to school. He had a job. He was 19 years old.”

Wikipedia states the following in that regard (with slight edits): “Angus Young was 18 when he and older brother Malcolm formed AC/DC in 1973. Angus was on lead guitar, Malcolm on rhythm guitar, Colin Burgess on drums, Larry Van Kriedt on bass guitar and Dave Evans on vocals. “Can I Sit Next To You Girl,” their first single, was later re-recorded with Bon Scott as their vocalist. They decided upon the name AC/DC after seeing the letters “AC/DC” on the back of their sister Margaret‘s sewing machine.

Young tried a number of stage costumes, such as Spider-Man, Zorro, a gorilla, and a parody of Superman, named Super-Ang, before settling on his signature schoolboy look at the suggestion of his sister. To match this image the press and public were told that Young was born in 1959, not 1955. The original uniform was created by his sister Margaret and when it fell apart from wear and tear, he used his uniform from Ashfield Boys High School in Sydney.”

With respect to the myth about Angus kicking him off the stage one night, Evans stated: “If you met me and met Angus, Angus is half my size. That was just a joke that Malcolm said on a TV show that was not true.”

Interview with Dave Evans by The Metal Voice: