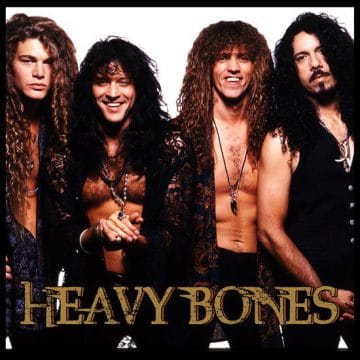 (bass), and Frankie Banali (drums). Their one and only album was released on Reprise Records in 1992 and produced by Richie Zito.

In terms of Heavy Bones‘ only album, Ellis indicated (as transcribed by the 80’s Glam Metalcast podcast):

“It’s a great record, a lot of people like it. It really was a far cry from what I wanted to do. I had never been forced to play to a click track before, I felt like my soul was stripped.”

With respect to making new music, Ellis revealed: “My spirit is back in the music business. It wasn’t for awhile, but it is again. I was hoping to have some new releases this year…but everyone’s singing the COVID blues. Jam from Cats In Boots contacted me last December. We wanted to make another record and to do it with all original members. That was in the works before the COVID thing hit. So I’m planning on releasing some solo stuff that I previously recorded and I have a whole lot of Heavy Bones stuff that didn’t make the record that I wanna release too.”

In regard to drummer Frankie Banali who passed away back on August 20, 2020, Ellis indicated: “It’s sad man. Frankie really raised the bar being a professional and being creative. To work with Frankie was a privilege. One of the greatest drummers in rock. He had the focus of Neil Peart and he had the groove and conviction of John Bonham. He was a great performer too. I remember turning around and seeing that mop of sweaty black hair, a giant smile, and big arms flying. He beat his drums liked they owed him money. When I moved to L.A., I connected with Frankie right away. He was one of my first friends when I got there. He was a great listener and a great communicator. I’m sure he’s up there with his Mom and Dad, Karen [Banali], and he is probably writing new tunes with Kevin [DuBrow].”

You can listen to the interview with Joel Ellis by Metal Mike for the 80’s Glam Metalcast podcast below: