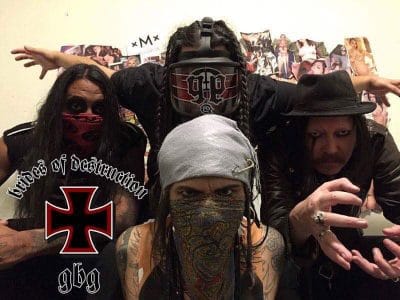 Brides Of Destruction GBG have two shows currently scheduled in Sweden: February 17, 2017 in Varberg and March 4, 2017 in Trollhättan.

Wikipedia provides the following history for Brides Of Destruction (with slight edits):

Nikki Sixx formed Brides of Destruction with L.A. Guns guitarist Tracii Guns, initially with the name Cockstar, after Mötley Crüe went on hiatus in 2001. Added to the lineup were Adema drummer Kris Kohls, L.A. Guns bassist Adam Hamilton, who played keyboard in the band, and singer London LeGrand. Hamilton was soon replaced by former Mötley Crüe singer and guitarist John Corabi while Guns left L.A. Guns to focus on the band. They briefly adopted the moniker Motordog before settling on Brides of Destruction before recording demos. The name was suggested to Sixx by industry friend and photographer, Dano Panariello. By 2003, both Corabi and Kohls departed the band, with former Annetenna and Ednaswap Scot Coogan replacing Kohls.

Sixx returned to Mötley Crüe for a reunion tour in 2005 with Brides of Destruction to be put on hiatus. However, the band continued with former Amen bassist Scott Sorry replacing Sixx while Ginger, of The Wildhearts, was added as the band’s second guitarist. Ginger‘s tenure with the band last for over two months while Sorry departed the group prior to their European tour.

Brides Of Destruction‘s “Shut The Fuck Up” video:

Brides Of Destruction – Shut The Fuck Up

Brides Of Destruction Shut The Fuck Up Music Video… enjoy it. Nikki Sixx