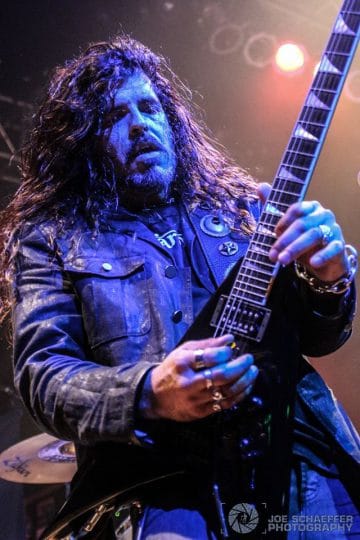 Former Leatherwolf frontman Michael Olivieri was recently interviewed by Metal Mike for the 80’s Glam MetalCast podcast. Olivieri fronted Leatherwolf from 1981 until the band split up in 1992, and again from 1999 when they reformed to

2004, and one more time from 2007 to 2019. The singer has just released a new album with his new group Michael Olivieri Band titled Love Is Contagious.

Back on August 1, 2019, Leatherwolf released a statement about Olivieri’s departure that stated in part: “Hey all, as most of you already know from an earlier Facebook post, we have parted ways with our vocalist Michael Olivieri for a second time. This move became inevitable due to disagreements over the band’s musical direction, as well as business and personal issues.”

With respect to that statement from Leatherwolf, Olivieri indicated (as transcribed by the 80’s Glam MetalCast podcast): “I think the direction portion of that isn’t a totally true statement. I wanted to do what we’ve always done. I wanted to be what Leatherwolf has always been. If you look at our catalog…we had “The Way I Feel” on Street Ready, “Gypsies and Thieves”, “Princess of Love”, “Share A Dream”…not only hardcore metal made up our ingredients. What made us special in my opinion was that we could take from different styles and influences and that’s what created Leatherwolf. I don’t think we were a predictable band. We weren’t heavy enough for the thrashers and too heavy for the glam crowd. I have great memories and I wish the guys in Leatherwolf the best. There’s no animosity or hard feelings.”

You can listen to the rest of the interview with Michael Olivieri by the 80’s Glam MetalCast podcast below:

In this episode, I talk with vocalist Michael Olivieri from M.O.B band and formerly of Leatherwolf. We talk about his new album “Love is contagious” and we r…