Steel Panther frontman Michael Starr was recently interviewed by Shanda Golden for In The Vault. 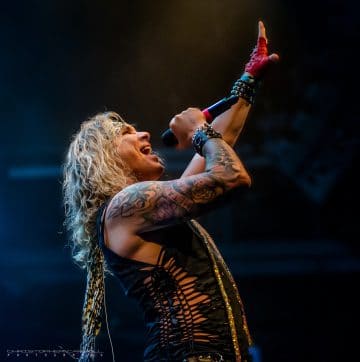 Golden commented to Starr that he was the star of the show for the band to which the singer replied: “I would… I don’t think that’s the way this band has worked but I appreciate that. We’re all starts in this band because one of the things that differs, that makes us different from other bands, is that Steel Panther, all three of us in the front, we get in your face. We make you feel part of the show. We all have charisma. It’s not… Nobody is shoe gazing on stage at a Steel Panther show. We are enticing girls to show their boobs. We are enticing guys to show their penises for [bassist] Lexxi [Foxx] and it’s fun!”

Sleaze Roxx stated the following in its concert review of a Steel Panther concert last year at The Rapids Theater in Niagara Falls, New York, USA: “Before long, it was time for the Satchel and Michael Starr stand up comedy routine which included some older joke favorites as well as seemingly some new comic material. Satchel introduced Starr as one of the top 25 heavy metal singers which he later shrunk down I believe to the top 25 heavy metal singers in the venue on this night. The same type of intros were bestowed upon drummer Stixx Zadinia and bassist Lexxi Foxx. There was a lot of talk about underage girls given that this was apparently an all ages show and of course, some silly plugs for being high on cocaine. Whatever the subject, all I know is that I could find myself laughing out loud and there were tons of smiling faces everywhere I looked in the audience.”

Interview by Shanda Golden for In The Vault with Michael Starr:

In the Vault with Shanda Golden MICHAEL STARR of STEEL PANTHER