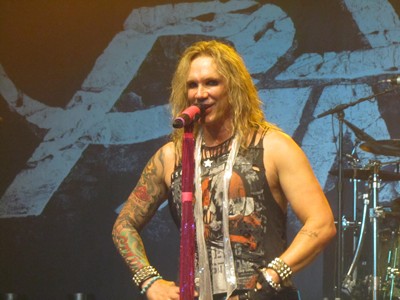 Steel Panther frontman Michael Starr has announced that the band’s upcoming fifth studio album is almost finished and he sounds quite excited about it.

The following message was posted on Starr‘s Facebook page yesterday:

“This morning I woke up with a clear vision and mind set. Our 5th Steel Panther studio record is almost done and I am seeing the future with this release. You are gonna love this new group of songs. We have work extremely hard and it’s paid off. Be prepared to have your nuts fucking rocked off. Ladies get a towel cause your tits are gonna explode and it’s gonna get messy.

The future is bright!”

“Steel Panther‘s latest studio album Lower The Bar is the fourth studio album in a row for the band to land in the Sleaze Roxx readers’ top 20 albums of the year. While a #11 finish on the Sleaze Roxx Readers’ Top 20 Albums of 2017 is nothing to scoff about, it is Steel Panther‘s lowest finish by far compared to its previous album finishes. Feel The Steel landed the #3 spot in 2009, Balls Out finished at #2 in 2011 and All You Can Eat ranked at #7 in 2014. Is the band’s schtick getting old? Are people getting tired of them? Sure, Steel Panther have their share of naysayers but they continue to put on fantastic live shows and all of their studio albums including Lower The Bar are worth revisiting time and time again. It is worth noting that Lower The Bar sees Steel Panther experimenting a little bit more than on past albums. Tracks like “Now The Fun Starts” and “Walk Of Shame” see Steel Panther departing a little bit from their usual amazing combination of great melodies, infectious guitar riffs and easy to sing to lyrics. It doesn’t really matter because at the end of the day, Steel Panther are the only band with Airbourne to have all of their studio albums make both Sleaze Roxx‘s and the Sleaze Roxx readers’ year end polls. That in itself is very impressive.”