Diemonds‘ frontwoman Priya Panda was recently interviewed by Izzy Presley of Another FN Podcast and spoke about a number of Diemonds‘ related topics including the group’s new self-titled album, which was released six days ago.

Panda also went through Diemonds‘ evolution and stated as follows (as transcribed by Sleaze Roxx): 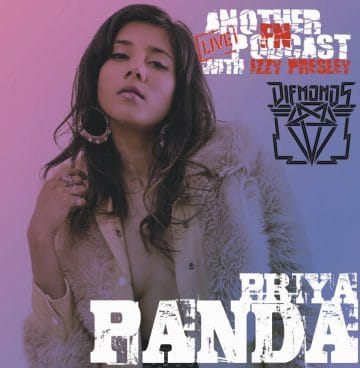 “We started out being people who, you know, it was under the guise of a band at first. Like every good band, you get wasted for a while together and just tell people that you’re a band. So of course, we had that phase for a bit but it didn’t last too long. We were  pretty much like… We pretty much started writing our first demo within the first few months of knowing each other so it was pretty you know something that we really wanted to do. Before I met [guitarist] C.C. [Diemond], I had started a band like myself — I had my two best girlfriends at the time in the band and the bass player Gabe Knox who actually ended up playing on the EP actually ended up going to grade six with C.C. so I was already playing in the band with him and brought C.C. in. My friends, my girlfriends, didn’t really want to, you know, commit to doing it, which I get. It’s not for everyone. But when C.C. joined, he was like ‘Oh shit, Gabe‘s in the band.’ So there was this — they hadn’t hung out since they were like 11. So it was a fun dynamic you know?

And eventually we found our drummer Vassil who is no longer with us but he was a big fixture in like the Toronto scene. Like he kind of looked like Dee Dee Ramone. He was fully tattooed but you know unfortunately, he also lived that lifestyle to a ‘T’. But at the time, he was like a fast punk drummer and we were fast — we wanted to be a glam punk band, which is what we just were. Yeah, we recorded it. We put out a demo… The case is like photo paper with a cassette printed on it… It’s a photo of a Rolling Stones cassette that C.C. like photoshopped to look like a Diemonds cassette. Yeah, a few people still might have it but we weren’t very good [laughs].”

Produced and Directed by Matthew Chrones Scott. Director of Photography, Adrian Smith. Edited by Katie Chipperfield. A BLEEDING HEART PRODUCTION with THE …

Panda also stated earlier in the interview: “If you hear all four of our records, they draw from different influences and different places where our lives were at the time. Like the first one — our first EP, we were just like snotty, like drunk kids, just figuring out for the first time. The next one was like, ‘I just want to be in Ratt.’ So [laughs[ you know, I just tried to write a Ratt record to the best of my ability you know? It was like full on right down to the catch phrases, ‘Dangerous but worth the risk.’ You know, all that shit. I was literally copying — aaah, “Trick Or Treat,” “Loud N’ Nasty.” Like you know, it was seriously drawing from our references.”

DIEMONDS – GET THE F&$K OUTTA HERE

Diemonds new music video for Get the F&$k Outta Here. From the album “The Bad Pack” released October 2, 2012 on Underground Operations – http://www.diemonds….

Panda continued: “The third record Never Wanna Die, we went through all this crazy shit. We lost a lot of our friends during that album but right before that album came out, like you know, that really referenced how dark — the album imagery and where we were coming from — and this record, well, we were pretty much in the writing process. It was kinda coming out on the other side of that and yeah, right before, in between the album and like the album being done and the album dropping, I probably have about ten albums’ worth of life that just happened so it’s like been the craziest year. [Since] putting this record out, immediately, I’m just back into writing songs. It’s been like a big relief just getting it out there you know? It was such a task and a half.”

You can listen to the entire interview with Priya Panda at Another FN Podcast.

In terms of Diemonds‘ new self-titled album, Sleaze Roxx touched on the group’s evolution from one album to the next as it stated in its review: “Canadian sleaze rockers Diemonds are a throw back to that era changing from one record to the next while playing music that has shitloads of ’80s influences. It’s hard to believe that the group that released In The Rough ten years ago is back with its fourth studio album that has such a different and way more mature sound. It strongly appears that the new record was close to not happening and the band possibly collapsing based on what Diemonds lead vocalist Priya Panda recently revealed in an interview with Sleaze Roxx but the group and frontwoman forged through a lot of adversity to come up with their most accessible and melodic effort. Diemonds have shown a lot of evolution in their sound over their 12 year history and while it might be difficult to figure out how the group that just released its self-titled effort had ever released the EP In The Rough, if you listen to Diemonds‘ album one after another, you can hear the evolution from one album to the next and hear the growth from one record to the other. The In The Rough EP was a “rough” and dirty punk like effort, which led to the ’80s influenced guitar heavy The Bad Pack (2011), to the more modern sounding Never Wanna Die (2015), which took some risks with more commercial tracks like “Secret” and “Ain’t That Kinda Girl.”

With their self-titled fourth album, Diemonds take the next step with their most commercially sounding, accessible and melodic record. I am usually the first one to complain when a group goes the commercial route (see for example my review of H.E.A.T‘s Into The Great Unknown) but there is one thing that stuck out as I listened to the more commercially sounding songs on Diemonds‘ new album. The tracks have so much melody and pop elements to them but over a punk like or heavy metal canvas (the music) that I find myself singing some of those more commercial tunes on my own without the songs even playing.”

Diemonds performing “Breathe” (which appears on the Diemonds album) at The Underworld in Camden, UK on September 2, 2017: