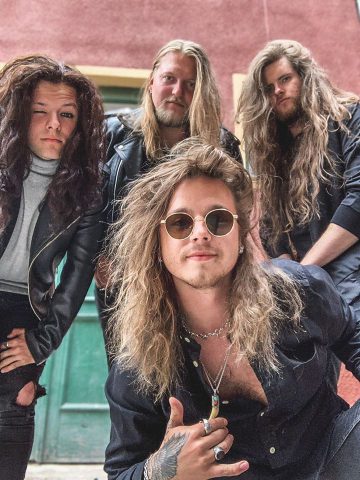 In terms of Bloody Heels‘ new bassist Gunner Everett, White indicated (with slight edits) “Yeah, Gunn is the new bassist. Well I played with him in a cover band for less than a year, that’s how we met and became friends. I knew his brother well too (who btw partly mixed and mastered our album), so when Chris decided to leave the band and focus on other things, he was the first choice that came to our minds, so we didn’t even try out other bassists. But working with him is cool, he’s helluva good bassist and he comes from a bit heavier background so that’s one of the reasons also why the new album is gonna be a bit heavier, cause couple of the songs we wrote with him.”

With respect to the ways that Bloody Heels‘ new album Ignite The Sky is different from their previous record Through Mystery, White stated: “I’ve probably said this multiple times by now, but the album is gonna be a bit heavier and a bit darker lyric wise. But people that liked “Through Mystery” will enjoy this album as well, I’m sure of that. The album still consists of lots of harmonies, big choruses, melodic stuff etc and all those things we love so much. We like to call this album Dark AOR, which hopefully is gonna become a thing, haha.”

You can read the rest of the interview with Vicky White at The New Wave of Hair Metal‘s Facebook page.