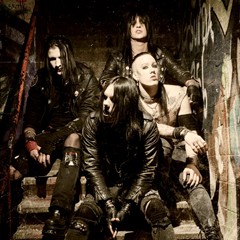 Metal Blade Records is pleased to announce the signing of Swedish sleaze and punk influenced metal band SISTER. “We feel honored to have signed with legendary Metal Blade Records. This is the kind of label we’ve been waiting for and together we know we will make big things happen!” comments the band.

SISTER’s Metal Blade debut will be annihilating the world come summer 2011. Stay tuned to MetalBlade.com and the band’s websites for further details over the coming months.

About the band:
The sleaze/punk influenced metal outfit known as SISTER, who hail from Stockholm/Jonkoping Sweden, formed in early 2006 working hard to build up a name as a strong act both live and in the studio. SISTER consists of 4 members- Jamie on vocals, Lestat on guitars and backing vocals, Rikki on bass and backing vocals, and Cari on drums and backing vocals- who combine the sounds of Punk, Glam, Rock, and Metal with an end result sounding something like the bastard child of GG Allin and Guns N’ Roses.

During 2006 and 2007 SISTER played all over Sweden and also went abroad as much as possible. In 2008 SISTER toured Europe in countries such as Germany, Austria, Switzerland, Holland, Denmark and Norway. Enter 2009; SISTER released the EP Deadboys Making Noise and a video for the track “Too Bad for You,” which got garnered great reviews from critics and fans alike while also catching the attention of Primordial’s Alan Averill ‘Nemtheanga’. Alan, having recently signed on to assist with A&R at Metal Blade Records, brought SISTER to the label’s attention in 2010 helping to secure the band a worldwide record deal.

During the years, Sister has built up a heavy fan base all over the world and has drawn a lot of attention as an up and coming band. Now as a part of Metal Blade’s illustrious roster, SISTER is sure to take the world by storm with the band’s raw and energetic brand of punk metal. As the band puts it, “SISTER is all about givin’ in to whatever you are into. Live the way YOU want and not how some fuckin’ narrow-minded piece of shit tells you to. Enjoy your fucked up life and throw yourself into whatever feels right. That’s the SISTER way of thinking! Or just fuck things up till you drop…”