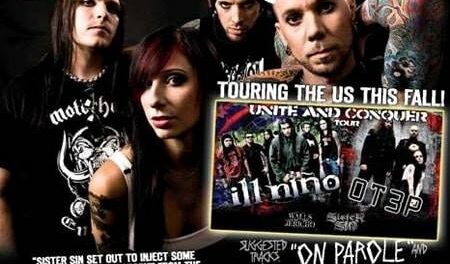 During the fall of 2008, Swedish rockers Sister Sin consisting of lead vocalist Liv Jagrell, drummer Dave Sundberg, guitarist Jimmy Hiltula and their bassist at the time — Chris Bednarz — toured in support of their debut full-length album Switchblade Serenades throughout the United States of America for the first time. By the end of December 2008, the group was 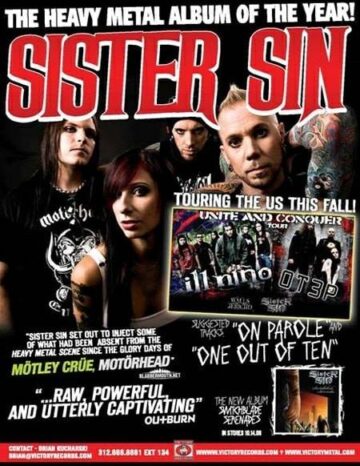 looking for a new bassist. Sister Sin ended up doing quite well without Bednarz considering that the bassist had written all the songs on Switchblade Serenades. The band went on to release three more studio albums — True Sound Of The Underground (2010), Now And Forever (2012) and Black Lotus (2014) — with the 2010 release ending up at #5 on the Sleaze Roxx’s Top 12 Albums of The Decade (2010-2019).

Back in the end of 2008, our debut full-length album “Switchblade Serenades” had just come out & Victory Rec. was eager for us to come over to the states for the first time. We had two offers on the table; either to support finnish monster-rockers Lordi or to support Otep & Ill Nino. For some reason the label choose the latter, a Nu-metal tour, to our great dissapointment. VR signed both these bands later on which explains a bit..

Anyhow, we had a great run and a great first time discovering America! Victory pushed the album hard and we had TV ads on MTV2 and Fuse, posters plastered everywhere and a streetteam handing out CD samplers outside the venues (anyone have a copy?) Only thing we didnt have was a working Visa

We did however have a ripping party over at Victory‘s head-honcho Tony Brummels house. Until Chicago PD came and shut it down that is

Did you catch SS on this tour??”

Sister Sin‘s “One Out of Ten” video: