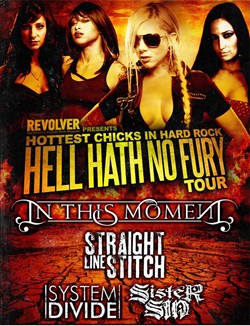 Sister Sin is proud to announce their long awaited return to the states for the Hottest Chicks in Hard Rock ‘Hell Hath No Fury’ tour, presented by Revolver. Sponsored by Keep a Breast Foundation, the tour will feature the band alongside In This Moment, Straight Line Stitch, and System Divide.

Sister Sin frontwoman Liv is passionate about the band’s sound: “We want people to have a good time, bang their heads and be happy. Forget the crap some people say – join us, and rock out. Sister Sin is unstoppable!” Their album ‘True Sounds of the Underground’, which reached both the Sleaze Roxx Top 10 of 2010 and the Reader’s Choice Top 20, is out now on Victory Records.

The tour will kick off on April 22 in Santa Ana, California, and will run through May 15. Be sure to pick up a copy of the 2011 Revolver Calendar featuring Liv as Miss November.