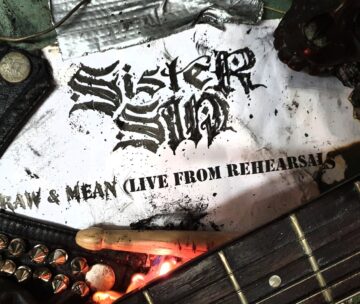 This is the audio from our livestream in June, mixed just a tad by Gustav Ydenius (Black Lotus)

So follow our Spotify, Itunes and whatnot to get notified!”

“I have to confess having goose bumps when I heard / saw Sister Sin launch through the first notes of “24/7.” There were so many great songs that the band could have played and I really didn’t care what songs that they played. Whatever they decided to play was “A okay” with me. As it turns out, the 13-song set was understandably heavy (with five songs) from their album True Sound of The Underground (2010) which landed the #5 spot on the Sleaze Roxx’s Top 12 Albums of The Decade (2010-2019). That album is probably one of my most played records in the last ten years. You simply can’t go wrong with any of the songs on that album. The rest of the set consisted of one track from Switchblade Serenades (2008), three from Now And Forever (2012) including the live premiere of “Running Low” and four from Black Lotus (2014). While True Sound of The Underground has always been in my album rotation, I hadn’t heard Black Lotus in quite some time so actually didn’t recognize the tracks “Food For Worms” and  “Sail North.” Clearly, this is an album that I need to revisit!

Sister Sin sounded very tight and the sound was really good for a live stream. This was probably the first live stream where I did not see any request for any “tips” of any kind. I can’t say enough how great it is to have Sister Sin back in action again.