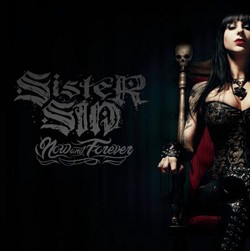 Sister Sin is set to release their new album ‘Now And Forever’ on May 22nd through Victory Records. The upcoming disc, the band’s first with new bassist Strandh, can now be pre-ordered at www.victoryrecords.com/merch/cds/24351/Sister_Sin_Now_And_Forever and will ship on the release date.

Sister Sin began recording ‘Now And Forever’ in late February with producer Chris Snyder. Some of the songs appearing on the new album are “Fight Song”, “Damageplans”, “Morning After”, “In It For Life” and the band’s first ever ballad.

Having grown apathetic towards the popular trends in Sweden’s hard music scene, Sister Sin arose from the gutters of Gothenburg in 2002. Settling on their moniker because it represented their “bound to absolutely nothing” lifestyles, the furious foursome entered the local scene as a hard-hitting, undeniable metallic force.

Female lead vocalist Liv, guitarist Jimmy, bassist Benton and drummer Dave created a rough-around-the-edges yet relatable image of dysfunction and attitude. Backed up with fresh lyrics and gritty riffs, Sister Sin set out to inject some of what had been absent from the heavy metal scene since the glory days of the early 80’s. “We just try to deliver good rock-and-roll music with the old-school touch,” notes Jimmy. “The style of music that we perform is an important part of rock history that deserves more attention.”

A year after their first rehearsal, the band had developed enough songs to release a studio album through a small Greek independent label. The disc, entitled ‘Dance of the Wicked’ (2003), was well-received by critics, and their self-released follow-up single in 2005 was a huge online success. Touring with such diverse acts as Cradle of Filth, W.A.S.P. and Doro, the band continued to evolve live, and gained strong media coverage. Rockeyez.com noted their music was “almost like hearing outtakes from the early days of Motley Crue”, while Sleazeroxx.com added Sister Sin was: “bursting with attitude and aggression…satisfying working-man’s metal that demands to be turned up to full volume as fists pump in the air and heads bang”.

Sister Sin unleashed ‘Switchblade Serenades’ (2008) and ‘True Sound Of The Underground’ (2010) via Victory Records, on the world, and delivered metal, rock, punk and all aggressive music fans with the most anthemic, driving and infectious rock album of the year. The album was recorded in Gothenburg, Sweden with producer Tobias Lindell at Bohus Sound Studios.

Singer Liv is passionate about the band’s sound, and says their message is loud and clear: “We want people to have a good time, bang their heads and be happy. Forget the crap some people say — join us, and rock out. Sister Sin is unstoppable!”