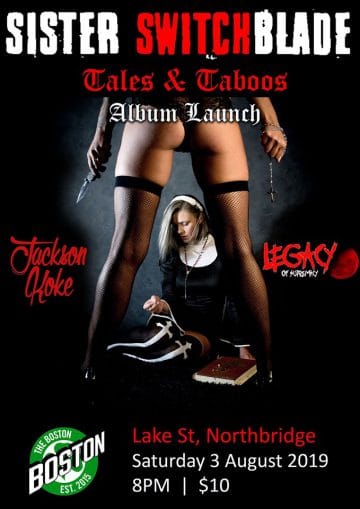 debut album Best Served Cold back in May 2017.

The following message was posted on Sister Switchblade‘s Facebook page back on June 24, 2019:

“Two years on from the release of ‘Best Served Cold‘, Australia’s Sister Switchblade return with the sophomore album, ‘Tales and Taboos’.

While the debut release was like a strut down mid 80’s Sunset Strip, the new album takes you on a trip back to Australia’s famous pub rock scene.

Stripped back, raw and unapologetic, ‘Tales and Taboos‘ sounds bright and fresh in an era of stale, compressed cookie-cutter rock.”

Sleaze Roxx stated the following in its review of Best Served Cold: “Simply put, if you like down and dirty sleaze rock, Sister Switchblade‘s eight faster paced tracks on Best Served Cold will more than satisfy! As for those three ballads, you may just want skip them like I do almost each time I listen to the album. Probably the best news pertaining to Sister Switchblade is that Smith is already hard at work on a second studio album so hopefully it won’t be long before we get some more new Sister Switchblade music and hopefully those two albums will be the catalyst to get Smith and his band touring outside of the rather isolated (but I am sure quite beautiful) area of Perth, Australia.”