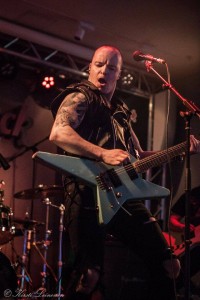 Hailing from Helsinki, Finland, Sixgun Renegades is a hard rock band which was originally founded in 2008. The band takes its influences from many great hard rock legends such as Thin Lizzy, Van Halen, Gary Moore, AC/DC and Peer Günt (legendary Finnish band).

Sixgun Renegades advertise themselves as taking no prisoners while playing attitude with turbocharged no bullshit rock and roll. The Finnish group states that it is its live shows, which are truly its strength as the band’s shows are full of energy, attitude and passion for playing music.

Sixgun Renegades are Niko Räty on vocals and lead guitar, Samu Tuomi on guitar, Miko Mattila on bass and Teemu Räty on drums.

The group has just released a video for its song “Renegade” from its latest EP Big Trouble, which follows the band’s 2013 EP Dangerous.