The following message was posted in part on Sixgun Renegades‘ Facebook page back on October 29, 2020: 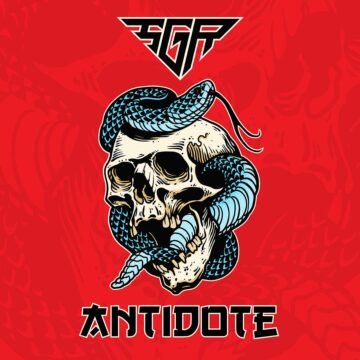 Antidote is the second single from the upcoming album. Antidote is not the cure for all the crazy things happening around the world, but it sure helps to release your inner aggression. Surrender to the pounding rhythm and rousing melodies while SGR presents you the most accelerating song so far!

“Antidote is the fastest and most aggressive song we have ever written. Nowadays when you read the news or turn on the tv, you just can’t help feeling blue or getting angry for all the crazy things happening around the world. This song is the antidote for those feelings. Put the music loud and bang your head, it sure helps.” – Niko Räty“

Sleaze Roxx interviewed the Räty brothers back in August 2015. In terms of how the band got started, Teemu Räty indicated:

“Actually we started to play together with our current bass player (the lead singer back then) Miko [Mattila] as a trio in 2003. Samu [Tuomi] joined us in 2005 and in 2008, Miko left the band. So we were thinking what to do now without a lead singer and bass player? So Niko was thinking “What the hell! I’ll be the lead singer!” We then added for bass our friend Otto Aho who played on the ‘Dangerous’ EP ). And we also took a different direction musical wise with a more rock and roll kind of style. And Sixgun Renegades was born.

We had five great years with Otto until he decided to leave the band due to other goals in his life. He felt that he wasn’t able to give his 110% so he decided to leave the band. We were of course very stunned by this, but it was perfectly clear that the Sixgun Renegades train would keep going on no matter what. We then called Miko whom had started to get into playing music again and asked him to join us. It was absolutely a no brainer for Miko and it was like he had never even left the band. And now with this line up, it is 10 years in the making and hopefully another 100 yet to come!”