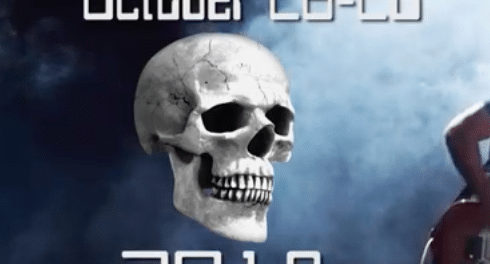 Rock N Skull is the festival that will seemingly never die or quit as despite two years of turmoil and some hard times, the festival organizers Justin Murr and Sarge will be coming back for more with a sixth edition scheduled for October 26 to 28, 2018. 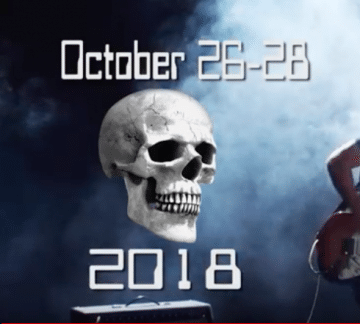 “Please read b4 playing the video and tune in Sunday at 5 pm for something “else” special…….. till then let me just say this….

5 years ago Skull Fest was born and the next year it became Rock N Skull. It was not perfect but it was mine and all of you became like family to me and Sarge. Skull Fest/ Rock N Skull was always supposed to be this cool event with hard to see bands. It also was supposed to be the fans and bands mingling, blue drinks flowing, in a party intimate atmosphere. I lost my vision and tried to be something I’m not. That’s why it’s so hard to type this, I always wanted to end RNS on my terms not because of “others” or any b.s. These past two years, there has been plenty of b.s. but in the end, Sarge and I just want to say thank you the only way we know how…….. enjoy the video!

Raise a drink. Here is to the past five years….we truly consider you guys our RNS family 4-life! Come back Sunday at 5 pm for something “else” special! It will be totally worth it !”

Sleaze Roxx attended the fourth edition of Rock N Skull in Joliet, Illinois, USA and stated as follows in its “Final Thoughts” section of its Day Three Concert Review: “I usually don’t include a section like this in any of my concert reviews but I’ve got to thank a number of people. First and foremost, thank you to Justin Murr for putting on such a great event. It was truly a lot of fun! Could it have been better organized? Sure. Could there have been certain predictable and preventable situations? Absolutely. That being said, and having organized city wide sporting events myself including a tennis tournament lasting about ten days, I can tell you that shit happens –rock-n-skull-poster– some predictable and some not, people don’t come through and it always feels like a mad rush at the end to get everything ready. I am pretty sure that Murr isn’t making a whole lot of money on this venture and is doing this in large part because he just loves the music and wants to keep the scene alive. So thank you Justin Murr. Thank you for all your hard work and putting on a really fun and great event!

I am sure that there are many others that have assisted Murr with 2016’s edition of Rock N Skull but three that come to mind include the very friendly Bob Long who manned the Rock N Skull merchandise booth (and where many acts did their free meet and greet) the entire four days, the tireless and always enthusiastic Sarge, and Melodic Rock principal Andrew McNeice who I am pretty sure is responsible for bringing Eclipse and Ammunition amongst others to Rock N Skull. For those heading next year to 2017’s edition of Rock N Skull in Pekin, Illinois, USA, make sure you check out Bob Long‘s music store Shandi’s Music & More, which I understand is less than 15 minutes from the venue there.”

Sarge & Justin want to THANK-YOU to all the RNS peeps that attended Skull Fest/ RNS the past five years!!!! This one is for you guys……………