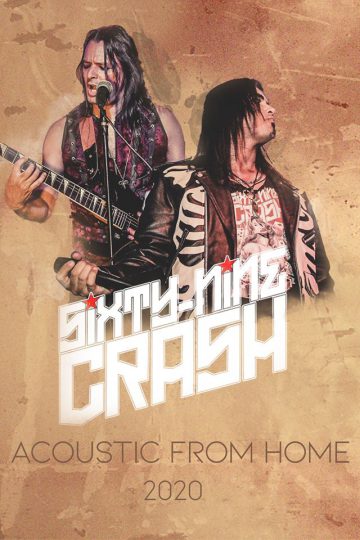 Brazilian rockers Sixty-Nine Crash featuring lead vocalist Jay Roxx and guitarist Alexandre Novaes have released two ‘acoustic from home’ videos for their tracks “Louder” and “Bleeding Heart.” “Louder” is the title track of Sixty-Nine Crash‘s album of the same name, which was released back in 2014 while “Bleeding Heart” appeared on the band’s album Postcards From The Black Sun, which was released in August 2018.

With respect to the latter track, Sixty-Nine Crash indicated in a message on their Facebook page back on May 1, 2020:

“Today we will release a different version we made of the song Bleeding Heart. No edits or overdubs The way we played, that’s how it came out. The idea was not to seek perfection, but the moment.”

Sleaze Roxx stated the following in its review of Louder! back in 2014: “When I first heard the single “Louder” from Sixty-Nine Crash‘s debut album of the same name, three things stuck out right away. One, how good the Brazilian rockers’ music sounded; two, that the band had a great guitarist; and three, that they were very European sounding with singer Jay B. Roxx‘s distinctive, but slightly monotone, vocal delivery.”

In terms of Roxx‘s vocal delivery, Sleaze Roxx added: “I think the biggest knock on Roxx is that his singing mostly stays in one register for the entire record — be it for the rather fast paced ballad “Back Again” (definitely the worst song here) to any of the better and more up-tempo tracks such as “Louder”, “Wicked” and “Wasted In Dreamland”.”