Nikki Sixx‘s “other” project Sixx:A.M. has released a new lyric video for the title track of the band’s latest album No Prayers For The Damned Vol. 1, which was released via Eleven Seven Music back on April 29, 2016. 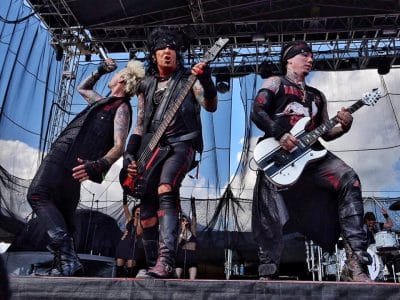 Sleaze Roxx stated the following in the first of its two reviews about Prayers For The Damned Vol. 1: “Prayers For The Damned brings back the memorable melodies, variety and, most importantly, the open-wounded honesty. In my book, Sixx has written some of the best songs of his career for Sixx:A.M. with tracks like “Prayers For The Damned” and “Better Man” two examples of that on this album. The subject matter of the whole album is every human’s internal battle between good and evil. Lyrics and execution are both very emotional and dig deep into gut-wrenching, brutal and always heartfelt emotional territory.

Prayers For The Damned is a powerful album, full of musical and emotional high notes. James Michael‘s vocals are impeccable — no surprise there. He shows off his vocal range beautifully. Sixx does what he does best; he delivers a steady, grooving bass line, and DJ Ashba plays his heart out on the classic rock guitar solos. It’s obvious these musicians are enjoying themselves here, and that Sixx:A.M. is a labor of love for them. Let Vol. 2 come.”

In its second review of Prayers For The Damned Vol. 1, Sleaze Roxx stated: “The title track “Prayers For The Damned” is one of the better songs. It just feels like more emphasis was placed on melody instead of distortion and modern sounds resulting in James Michael‘s singing and DJ Ashba‘s guitar solo really shining on this one. As I listened to the rest of Prayers For The Damned, there is definitely a certain formula that you can take from most of the songs on the album. You get the slower verses often with modern sounding tones before a rather catchy almost pop like chorus comes in to carry each song. Every song on Prayers For The Damned is at the very least decent (except for “When We Were Gods” which slow verses are just so dull and the “catchy” chorus can’t save the song) with some being more engaging than others.”

Official lyric video for ‘Prayers for the Damned’ by SIXX:A.M. Stream / Buy ‘Prayers For The Damned’: https://fanlink.to/PrayersForTheDamnedExclusive ‘Prayer…