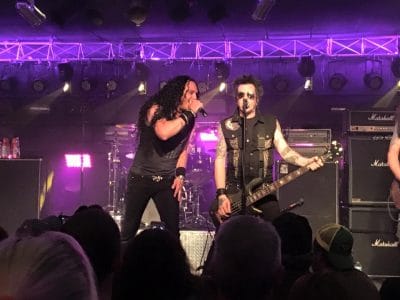 Bad news for anyone who hoped for a Skid Row reunion with their former lead vocalist Sebastain Bach as Skid Row have now formally confirmed that former DragonForce frontman ZP Theart who has been serving as their “special guest vocalist” for the last year is now their lead vocalist.

Skid Row bassist Rachel Bolan advised the audience at the Casino in Nova Scotia, Halifax, Canada on January 14, 2017 as follows (as transcribed by Sleaze Roxx and see video below): “First of all, I want to make this announcement finally formal. He’s been with us for a year, our new lead singer, ZP Theart. Come out here. Where is he? Oh, there you are. We’re going in the studio soon to make a new record. We love this guy. He just lives too far away. We’ve gotta get him to move to the States but that’s coming down the road.”

Theart then asked, “Is this official than?” to which Bolan stated, “It’s official!”

Following rumours that he would be replacing singer Tony Harnell, Theart debuted as Skid Row‘s singer at the group’s gig at the Mohegan Sun Arena in Uncasville, Connecticut, USA on February 13, 2016.