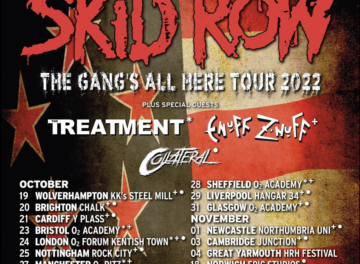 Skid Row to tour UK in the fall with special guests Enuff Z’Nuff, The Treatment and Collateral 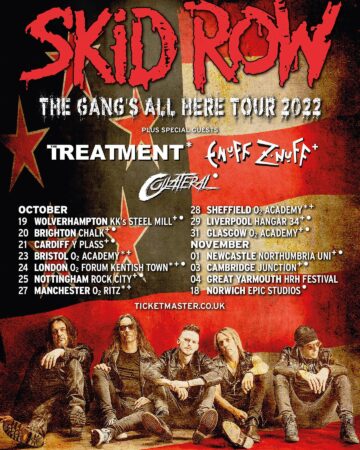 Sleaze Roxx caught Skid Row performing live at the Sound of Music Festival in Burlington, Ontario, Canada back in mid-June 2-2022 and stated as follows in its concert review:

“Overall, Skid Row met my lofty expectations on this night and I look forward to their new album The Gang’s All Here, which will be released via earMusic on October 14, 2022. Funny enough, when Grönwall mentioned that Skid Row had a new studio album coming out, the crowd reaction was kind of lukewarm. It will be interesting to see whether Skid Row will be able to carve out a significant chapter of their history with their new material now that they have Grönwall in the line-up or whether they will still be riding the coattails from those first two albums released more than 30 years ago (and there is nothing wrong with that). The most important thing for Skid Row going forward is that they finally have a singer that can sing the early material really well and that also possesses enough charisma and stage presence to match and make people forget Sebastian Bach. There aren’t too many singers that can fill the gargantuan shoes left by Bach but Grönwall seems to be the best man for the job.”

Skid Row will be releasing their much anticipated new studio album The Gang’s All Here via earMusic on October 14, 2022.